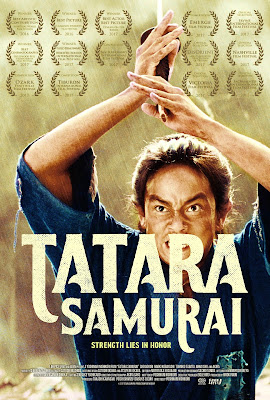 Yoshinori Nishikori’s epic TATARA SAMURAI is the story of Gosuke a young man next in line to become the maker of a legendary steel used for making swords. Scarred when a raid on the village left his mother dead Gosuke has always been ill at ease with how to keep those he loved safe. When another raid reminds him there is still danger he leaves the village and goes off to join the army. However politics and the coming of fire arms forces him to rethink what he is doing.

Thoughtful and heartfelt TATARA Samurai is a film that gets under your skin and moves you. That the film works so well is due to the film focusing on Gosuke as opposed to all that is happening around him. While all of the politics, changing of world and all of that figures into how we feel about what happens, the fact that we never lose sight of Gosuke and his journey is what binds us to it. This is ultimately our own story. While set several hundred years ago ultimately this is a quest that we all take. We all want to know where we belong and by keeping that front and center the film remains riveting and something that we can relate to.

Very recommended for anyone wanting a epic story.

TATARA SAMURAI is being released in US theaters Friday June 2nd by Eleven Arts.
Posted by Steve Kopian at May 30, 2017