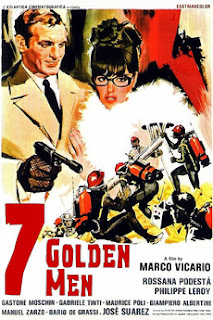 A genius named the professor robs a bank in Switzerland of its gold deposits.

Good but strange caper film that begins with the robbery, which lasts for over an hour of screen time, before becoming a standard well planned caper has complications for the last half hour.

Not bad, but very odd in that the film really doesn't let you know any characters other than the professor and his girlfriend for most of the film. Who are these people, you really don't know, even if it is amusing. Its easiest to explain the film as like watching one of the recent Danny Ocean films but starting with the actual robbery, with out all of the set up and character introductions.

I liked it but I really can't understand how the film spawned a sequel, except maybe in that the film is a real Italian Job sort of film. (Maybe) Worth a look, possibly with its sequel.
Posted by Steve Kopian at May 13, 2017