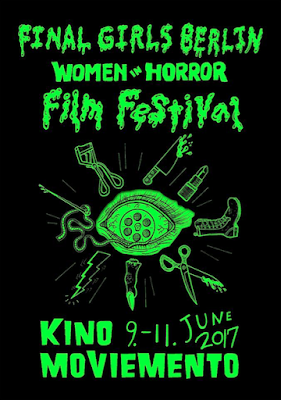 Berlin, DE – The 2nd edition of Final Girls Berlin Film Festival will take place in Berlin, Germany from the 9th to the 11th of June, with a program consisting of three feature films, eight curated short blocks, a talk on the “horror hag” subgenre, a workshop on monstrous representations of the “other” in horror, and an art exhibition with five female artists working in horror.

Morgan and Jean, ex-girlfriends who run a true-crime podcast about female serial killers, find themselves in a bind when they suspect Morgan's new love interest of being a murderer as well.Jungermann, a Brooklyn-based comedian, was obsessed with female serial killers growing up, and has an affinity for the genre world: “I’m not interested in making personal films that don’t invite people into the experience. Which is why I’m drawn to comedy and genre. It allows you the chance to expose yourself while still thinking about the audience.”

XX
XX is a horror anthology with four chilling segments made by four horror bad-asses. Jovanka Vuckovic (former editor of Rue Morgue Magazine) adapts a spine-tingling Jack Ketchum story in “The Box”, Annie Clark’s (St. Vincent) directorial debut “The Birthday Party” is a hellish take on Weekend at Bernie’s; Roxanne Benjamin (V/H/S trilogy, Southbound) gives us an old-school horror romp in “Don’t Fall”; and Karyn Kusama (The Invitation, Girlfight) has to come to grips with the darkness in “Her Only Living Son”.


IN MY SKIN​
Esther (Marina de Van) is an ambitious 30-year-old woman. One fateful night at a party, she seriously hurts her leg, but can't seem to feel the pain. This incident propels her toward the start of a self-destructive compulsion. IN MY SKIN is an exploration of a professional woman's descent into increasingly disturbing and obsessive acts.

Marina de Van broke her leg when she was 8, and it forever changed how she viewed her body. “I didn't faint and I didn't really feel pain. Instead, I saw my leg as if it wasn't part of my body, as if it was an object. For me, then, it was a fascinating deformed object… I was also struck by how little it takes for our bodies, or parts of our bodies, to suddenly become alien objects, but ones which fascinate us.”

ALL IN THE FAMILY

​Tickets are available to purchase at Moviemento, Central, and online: www.moviemento.de
Posted by Steve Kopian at May 31, 2017