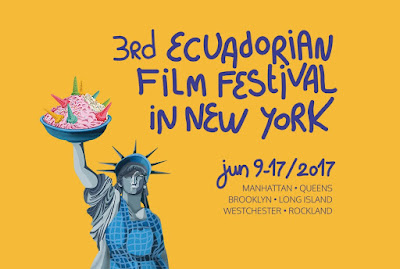 Maravilla, the New York-based organization dedicated to raising awareness of Latin America through films and the arts, has announced the third annual edition of the Ecuadorian Film Festival in New York. The competitive film festival, the first of its kind in the world dedicated to showcasing and celebrating the burgeoning cinema of Ecuador, will take place June 9-17 in seven different venues across New York’s Tri-State area: Village East Cinemas in Manhattan; Queens Museum; Syndicated Bar Theater Kitchen in Brooklyn; The Picture House in Pelham; the Plaza Art Center in Patchogue; Cinema Arts Centre in Huntington; and Ramapo Art and Cultural Center in Spring Valley.

This year’s festival will present ten feature-length and eight short films in their U.S. or New York premiere, with the presence of the filmmakers. The festival will open with the North American premiere of the documentary feature My Aunt Toty (Mi tía Toty) by León Felipe Troya, a portrait of Toty Rodríguez, the Ecuadorian actress who made her career in France in the 1960s who became a well-known diva in the South American country, and an icon of the women's rights movement in the country.

Other highlights of the festival’s third edition include the Rotterdam Film Festival favorite Alba, the auspicious debut feature by Ana Cristina Barragán, the Ecuadorian candidate to the 88th Academy Awards Such Is Life in the Tropics (Sin muertos no hay carnaval) by Sebastián Cordero, and Alexandra Cuesta’s Territorio, which had its world premiere at FID Marseille last year. Expected to attend this year’s edition are 20 guests including directors Cordero and Barragán, and actors Toty Rodriguez, Andrés Crespo, and Roberto Manrique.

EFFNY will present two awards. A jury composed of renowned film professionals composed by film programmer and documentary ﬁlmmaker María Campaña, Tribeca Film Festival’s Lorren Hammonds and film scholar Marguerita Tortora, founder and director of the Latino and Iberian Film Festival at Yale, will present the award for Best Film, and the public attending the screenings will vote for the Audience Award.

The Ecuadorian Film Festival in New York is produced in partnership with Brooklyn’s Syndicated Bar Theater Kitchen, and made possible thanks to the generous support of the Ministry of Culture of Ecuador and Telemundo 47. In addition, it is supported by the Queens Museum, Cinema Tropical, Café Velez, Santana, Hoja Verde, Botánica and jetBlue.

Snapshot
(Instantánea, Catalina Arango, Ecuador, 2016, 75 min.)
Antonia is a child photographer who likes to capture memories with her camera. She will spend her vacation with her grandparents, and although going to the beach with her dog may sound appealing, she's not entirely happy with the idea of this trip. Mario, her grandfather, is a serious man, and will help her study math, but her vacation can only be a disaster. Yet everything changes when her grandfather gives her his old Polaroid camera. New friends, adventures, and more, will turn this vacation into an unforgettable experience.
Preceded by Cocolata (Sofía Comola Romos, 2016, 6 min.)
Saturday, June 10, 11am at Queens Museum; Sunday, June 11, 4pm at Ramapo Art and Cultural Center; Spring Valley Saturday, June 17, 1pm at Syndicated Bar Theater Kitchen, Brooklyn

Alba
(Ana Cristina Barragán, Ecuador, 2016, 94 min.)
Alba is eleven years old. One afternoon, her mother is admitted to the hospital and she has to live with Igor, her father, who she barely knows. Igor’s attempts to get closer to Alba, the girls in her school, and her first kiss serve to propel her path to adolescence and acceptance of her family.
Preceded by El primo del norte (Andy Arteaga & Andrea Arízaga, 2017, 20 min.)
Saturday, June 10, 7:15pm at Village East Cinema; Sunday, June 11, 4pm at Cinema Arts Centre, Huntington; Wednesday, June 14, 7:30pm at The Picture House, Pelham; Saturday, June 17, 7:30pm at Syndicated Bar Theater Kitchen, Brooklyn

Such Is Life in the Tropics
(Sin muertos no hay carnaval, Sebastián Cordero, Ecuador, 2016, 100 min.)
In Guayaquil, a populous city in Ecuador, a wealthy young man is trying to evict 250 families that have been squatting on the land he inherited from his father. The leader of the squatters is willing to negotiate, but can this tense conflict be resolved without bloodshed?
Preceded by Reconstruyendo esperanzas (Rebuilding Hope, Andrea Moncayo & Ismary Martínez, 2016, 14 min.)
Saturday, June 10, 9:45pm at Village East Cinema, Manhattan; Tuesday, June 13, 7:30pm at The Picture House, Pelham

Ecuatorian Shetta
(Daniel Varela, Ecuador, 2017, 60 min.)
Baltasar is going through a dry spell. Harvest time is taking too long and this delay is affecting his marijuana business. To make things worse, his ex wife sends Catalina, their daughter, to spend some time with him. That day, Baltasar has to jump through hoops in order to please his clients and his daughter, with the help of his sole partner: a white 1977 Volkswagen Beetle. Baltasar turns to Laura, an old woman who happens to be the best marijuana grower in Quito. She has a new type of weed: Ecuatorian Shetta. Shui, Alejandra, Martín, Alicia, and Ximena, Baltasar’s best clients, try it and enjoy it. Shortage and stress will bring Baltasar difficulties and emotional conflicts with Catalina. His main desire is to keep his daughter happy and to take her some day to the Galapagos Islands so she can meet her grandmother.
Preceded by The Fare (Santiago Paladines, 2016, 25 min.)
Tuesday, June 13, 7:30pm at Plaza Art Center, Patchogue; Friday, June 16, 10:15pm at Syndicated Bar Theater Kitchen, Brooklyn

Translucid
(Translúcido, Leonard Zelig, Ecuador, 2016, 86 min.)
Rubén has been diagnosed with terminal pancreatic cancer. He has three months to live or about a year and a half with treatment. He has decided to end his life with dignity, leaving no loose ends.
Preceded by The Train Leaves Two Towns (Ivan Mora Manzano, 2015, 8 min.)
Thursday, June 15, 7:30pm at The Picture House, Pelham; Saturday, June 17, 5pm at Syndicated Bar Theater Kitchen, Brooklyn

Isolated
(Aislados, Marcela Lizcano, Ecuador, 2015, 75 min.)
There are 540 inhabitants in an island the size of half a city block. Isolated takes us to the most densely populated artificial island in the Colombian Caribbean. There is no police, no priests, no armed conflict. There are 97 homes in which reside 18 families. There is a school and a small square with a cross in the center that honors the island’s name: Santa Cruz del Islote. The arrival of the modern world and possible displacement awakens the community to face new possibilities the future may bring. Aislados reflects on the role of humans and their environment, transforming this island into a metaphor of our own world.
Preceded by Summer Beats (Beats de verano, Jairo Fernando Granda, 2015, 20 min.)
Friday, June 16, 5:15pm at Syndicated Bar Theater Kitchen, Brooklyn

Territorio
(Alexandra Cuesta, Ecuador, 2016, 66 min.)
Alexandra Cuesta quotes eternal wanderer, Henri Michaux as one of the inspirations of her first feature. It’s odd, then, that the opening sequence of Territorio (the first film Cuesta shot in her native Ecuador) shows a boat heading for the shore. It is very likely that, to Cuesta, the image of water hides the same connotation that it does to the author of “The Sea of Breasts:” returning home, being sheltered in the mother’s womb. Without detouring from the formal approaches of her previous work, Cuesta traces a journey that crosses the country from north to south. In so doing she draws a human cartography in which the aim is to achieve an impossible balance between the foreign traveler’s gaze and the earnest familiarity of those who return home temporarily.
Screening with 7 Walls
(7 muros, Daniel Yépez Brito, Ecuador, 2016, 75 min.)
Moving from the house that has been his home for 20 years, presents Daniel to a harsh reality: he does not know who his neighbors that have surrounded him for so many years are. Now he will not leave without discovering his stories.
Friday, June 16, 7:45pm at Syndicated Bar Theater Kitchen, Brooklyn; Saturday, June 17, 1pm at Queens Museum


*All films in Spanish with English subtitles
Posted by Steve Kopian at May 15, 2017