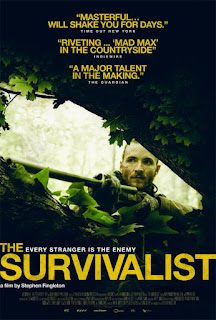 This is a repost of the review from Tribeca 2015.

I am rerunning the review with out changes because I can't really argue with what I said about the film but at the same time despite it being a negative review I do think you may want to try it. That may sound a bit daft but consider the film has remained in my mind since I saw it, as well as in the mind of most writers who I know who also saw it at Tribeca. Some of them loved it some of them didn't but everyone keeps bringing the film up as a benchmark in post apocalyptic cinema. Like it or not you'll know you've seen something.

Last year the winning film at Tribeca was a post apocalyptic HERE ALONE, a fact which confuses everyone I know who has seen the film, even it's biggest fans. Everyone I know much prefers the SURVIVALIST to that film simply because what is in it rings more true. Some times you need to see a mistake to know when someone got something right.

I still have a lot of issues with the SURVIVALIST, I wouldn't be running the original review if I didn't, but I do think that the film is worth seeing. There is something here that makes the film hang with you. It is a film that some two years on is still being debated by the people who saw it which is not something that you can say about the vast majority of other so called better films.

Despite my reservations do try the film.

After the collapse of society thanks to over population and declining resources a man tends his small garden in the middle of the forest. There is a just enough food produced for him. Things become complicated when an older woman and her daughter show up wanting to barter food. Against his better judgement the man lets the women in and thus begins a series of games between the man and the two interlopers.

While there is much to like about the SURVIVALIST, there is also much that makes it a tough slog. The reaction to the film at the screening I attended was all over the place with the result that the film sparked long conversations that lasted past the next film screened and in my case continued on the subway with a fellow writer I met in the subway.

The performances are first rate. Everyone pretty much gives it their all. The world largely looks lived in and broken down. There are also some very good sequences, in particular the sequence in the field where the man hunts the girl and the other man who kidnapped her. Everyone mentions this one crane shot which is absolutely amazing.

Unfortunately the film has some problems that keep the film from being something that I can truly like.

For me the first problem is the staging of the the entire sequence prior to the arrival of the women. Shot so as to give us a sense of life in the woods we get long sequences of the man going through several days. Its so detailed that I thought to myself that we'd seen everything he does with the exception of him masturbating-only to have it occur-graphically-a minute or two later. I disconnected at that point, not because I'm a prude, simply because the film felt it was going to be too day in the life.

The next problem is that the world the film operates in doesn't work. Clues in the dialog talk about things being bad for at least seven years, which would be possible, except that when the women appear they are neat and clean, something no one else in the film is. There are snippets of dialog that give clues to the outside world but the lines seem tossed off and don't carry weight because we simply don't know anything.

Thinking about it part of the problem is that there is very little dialog. No one talks much with the result that we simply don't know anything... or enough. Doesn't anyone talk except to be part of some plot? If you think about it most of the dialog is between the mother and daughter plotting, or is some line that directly relates to the action. There is no stray line, no comment that doesn't serve a purpose. No one talks. All of this might have worked had the film not brought in the roving bands or the ending...

...and speaking of the ending. The final sequence is truly pretentious. There is an implication that the girl knows the deal with settlement but why is that? Why is everyone so nonchalant that this stranger is walking outside the wire? Its a weird moment that doesn't really play really, especially at the moment where it cuts out- I mean why a pregnancy conversation when there is no way the guard could know that.

Honestly looking over my notes I realize I could pick the film's internal logic apart, but that's not fair
since the film feels less like a movie and more like a high brow novel with pretensions in it's head. Things don't happen organically they happen because they are supposed to mean something.

They do mean something- you're boring you're core audience which isn't going to sit for the pretentious meaning of the events that transpire on the screen.

Honestly I don't hate the film but I don't need to see it again
Posted by Steve Kopian at May 17, 2017