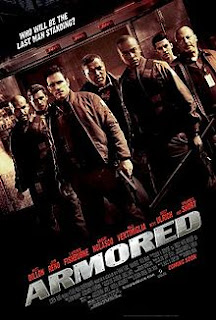 New guy at an armored car company gets talked into becoming involved in an armored car heist by his fellow drivers in order to score some quick cash. The problem is that they really don't have much of a plan and when complications arise things turn deadly.

Fast moving popcorn action film has a great deal going with it. First off the film is under 90 minutes so the film doesn't really have the time to bog down in plot. It cranks everything up and just goes. Next the film has some great action sequences so one moves towards the edge of ones seat. Lastly the film has a stellar cast that include Matt Dillon, Jean Reno and Lawrence Fishburne. Its a first rate cast that sells and covers over the stories short comings.

This isn't brain surgery its a popcorn movie and on that level it scores highly. Worth a look.
Posted by Steve Kopian at May 25, 2017