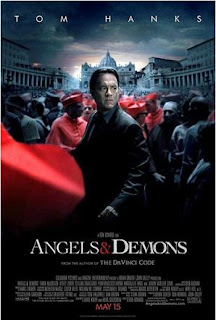 Based on the book that precedes The DaVinci Code this film follows Robert Langdon as he tries to sort out an evil plot that involves the kidnap and murder of four Cardinals and plot to blow up the Vatican via an anti matter explosion. Once more Langdon has scant hours to unlock the secrets of the mystery and save the lives of the people in Rome.

I really disliked the Da Vinci Code. I found it slow and dull and very silly. This is a better movie that is fast paced, occasionally exciting and very silly.

Okay if you think about the amount of time that they have to unlock the secret of whats going on you'll find its really not possible. Basically all of the events happen in four or five hours and its not enough time. Add to it the fact that what the plot requires is so incredibly laughable that you really can't believe it. I have no doubt that this would work as a book where words can be used to gloss over or redirect the silliness of it all, but as a movie where its stark reality you really can't hide how dumb much of it is. So many times all that needed to happen was for one person to say something obvious then it would all collapse.(I won't even get into the fact that you'd have to be blind not to realize who the bad guy is the minute he walks on screen)

That said its a reasonably enjoyable film.I know that may shock you but there is enough to the story that you may very well get hooked into the tale. Certainly most of the set pieces work unto themselves (with the exception of the incident with the cops and the fountain). There are some incredibly beautiful images (the nature of which I dare not reveal lest I reveal plot points). When the film works and you manage not to think about how dumb much of plot is its actually worth a bucket of popcorn. I and my dad both enjoyed the film on a pure entertainment level. That said I didn't need to pay 11 bucks to see this and think either DVD or cable is the way to go.
Posted by Steve Kopian at May 19, 2017