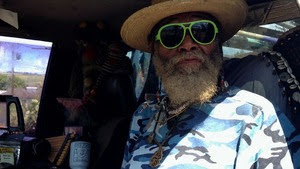 The opening night film of the Harlem International Film Festival is The Garden of the Peaceful Dragon. It is a portrait of Burley Luvell Benford III, an African-American veteran who lives in Kauai Hawaii and has lead one hell of a life. Currently living off the grid on an abandoned piece of land he is a man with lots of friends who view him as more than just a guy they know but a teacher about how to really live life.

I am tempted to explain Benford’s entire story to you but that would take away a great deal of the fun of the film. It’s an absolute blast watching his life unfold before us in such a way that we are left to wonder if it really is possible to have done all that he has (IBM, Timothy Leary, Grateful Dead, sailing...)  . Apparently it is and now thanks to director Daniel Peddle we have something to kind of aspire to.

The one thing that might be considered a flaw in the film (at least by the less forgiving members of the audience) is a technical one. Because so much of the film seems to have been shot on the fly a lot of the footage with Benford is not the best. While it is perfectly understandable considering how it was shot, the from the hip nature can be bothersome until we fall under Benford’s spell. I mention the roughness because I don’t want anyone to dismiss the film for a stupid reason. I want everyone to go into the film and meet Burley Luvell Benford III and give him a fair shake.

Technical bumps aside this is a super film and recommended.

For more information and tickets go here
Posted by Steve Kopian at May 04, 2017