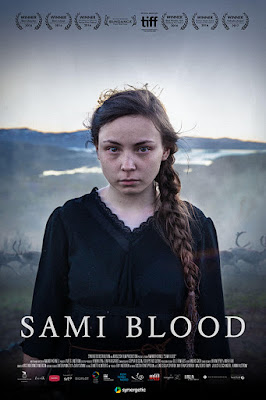 Christina is an elderly woman who is going back to her home town among the native people of Sweden. She is returning under protest with her son and granddaughter for the funeral of her sister. Leaving the village and going to a hotel alone after the funeral Christina. There she thinks back to her childhood when she was called Ella-Marja. Faced with  the institutionalized racism of the era she discovers that if she dresses as other people from Sweden and not like a Sami (her people) she will be treated with respect. She then heads off on a course where she will turn her back on her heritage and her family.

Intense drama shows clearly the racism that was rampant in the 1930's. This is a story that is often painful to watch as we see how people treat each other badly for what is no reason at all. It is also a clear explanation of what the pain and suffering being the target of hatred.

The moody images that make up the film are filled not only with a great beauty, which cleaved from the narrative might make beautiful portraits for your wall. Unfortunately the images are combined with Amanda Kernell's script and the fully invested performances of her actors making the images almost painful to look at.  Everything has a hidden meaning and hidden hatred. It makes for an intense experience that often is like a poke in our eyes or a punch in our hearts.

I was both moved and disturbed by the film in ways that were much more intense than I expected.

Highly recommended this is one for anyone who likes intense dramas