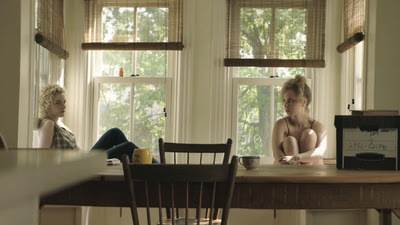 The title refers to a line said by one of the characters which goes "If it was one percent more humid we'd all drown" I kind of understand from her point of view what that means in context but for the title of a film it's rather lousy.

The plot of the film has Catherine and Iris deciding to spend the summer together. Both are home from college and both are suffering from the after effects of a tragedy in the recent past.  As the summer goes on the unease they feel will result in both of them doing things they might end up regretting.

I don't know where to begin. There are so many problems with the film  that I spent most of the film shaking my head and effectively annotating the problems with what happens on screen.

The problems start with the characters, most of which don't seem fully formed. Supposedly the two young women are in their early twenties the act and behave frequently like crazed teenagers. Sure they smoke and drink and carry on but their behavior beyond that seems several years younger. Catherine is working on her thesis which I always thought would be about the time a person develops some maturity, but not in these girls.

Iris's bad behavior while understandable, never rings true. I've know several young women with similar self destructive streaks and the behavior mixed with her other traits never seems to come together.

The films internal logic is totally fucked. I could list a whole bunch of problems with the story but I'll stick with just one the time frame because to list more would fill a book.

The time line is so badly mangled that if you think about it the film collapse completely. Supposedly the tragic event happened four months earlier then the start of the film which would mean it was February or March, which begs the question what was Iris doing home from college and why would they be even thinking of swimming in upstate New York when it would be too cold (and why are they not dressed for winter when it happened?). Add to that  civil legal proceedings happening as a result of the accident happening way too fast for any court I know of  and you have to laugh yourself silly. The time frame simply is in its own universe.

Watching ONE PERCENT my head hurt because as good as the film looks nothing in it felt real- worse it felt like a film that made sense in some longer version where things were explained.

Watching this in a press screening at the end of March I quickly realized this was the first (and pretty much only) of the Tribeca films of the year. A Tribeca film is an inde film that is trying way too hard to be about something. Its a film that has more ambition than achievement. They are films that bring a groan to the press corps because for the most part the films can be be worked out from the start to almost the finish- where usually there is an odd twist from so far out of left field you can't anticipate it-usually its some one dying . Here no one dies despite the film feeling like a funeral.