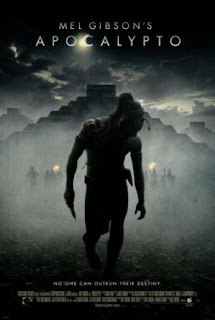 Epic adventure on a grand scale. Mad Mel has made a great adventure film, who's subtitles will keep away a core audience.(Though I guess the idea of the vernacular coming from Indians would have been laughable) The plot has an Indian village raided by the Mayan city. The survivors are carted off for sacrifice (though Jaguar paws wife and children successfully hide in a well.) In the city that are brought to the temple for sacrifice but when they aren't needed, they are "turned loose" and used as moving targets. Jaguar Paw escapes and his flight becomes a fight to elude his pursuers and to get back to his family.

Its violent, but thats the nature of the story and not necessarily a condemnation of the Maya.(Anyone taking offense at the portrayals of the society should keep in mind this is a look at the city on one day at one brief moment of time) While bits of the story have been been there done that (Naked Prey?), the characters and the sense of place and being somewhere for the first time short circuit any real notion of cliché.

This is grand story telling that was a good reason to get to bed really late
Posted by Steve Kopian at May 24, 2017