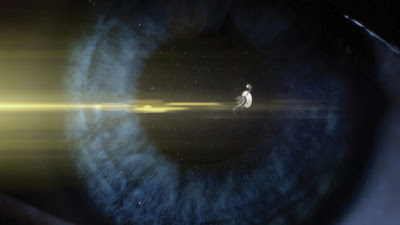 The Farthest presents a conundrum for me. On one hand it is everything you want in a documentary-it has all the right people telling you the story of the Voyager space flights in such a way as to make the trip something that you connect to. It is full of mind blowing images and its use of music and sounds make it entertaining as all get out on its own terms. When the film is firing on all cylinders it is quite simply as good as documentary filmmaking gets. On the other hand it has a couple of bumps.

Growing up in the late 1960’s and early 1970’s I was of the right age to eat up the everything that was space related. I went crazy for the Viking Mars probes, the Apollo missions and the space shuttle. I also ate up the Voyager mission and I went crazy as the craft sent back some truly spectacular images. I would drive my parents crazy watching the occasional broadcasts from mission control where pictures were slowly seen forming on the screen (Honey wouldn’t you rather watch paint?). I loved this stuff.

And for the most part The Farthest reignites all of that. Watching the film I was a kid again seeing the universe expand before my eyes. The tiny blurry images of Jupiter or Saturn in a telescope was replaced with these sharp images of truly HUGE planets. All of the bits and pieces of this film are stunning and they made me and they will make you fall in love with space.

The problem for me is the film has some odd bumps which kept me from calling this a perfect film. First the film rambles on for the better part of 20 minutes before we get to the actual mission. The intro isn’t bad but it just kind of goes on. The other problem is that film is kind of uneven in its coverage. Somethings like the construction of the craft seem to be breezed through at speed while other subjects are giving loving treatment. The golden record with the audio recording and pictures encoded on it is something that keeps popping up. Its interesting, but at the same this is supposed to be about the whole trip.

Reservations aside this is a film that any space or science junkie should see.
Posted by Steve Kopian at May 02, 2017