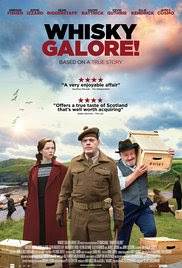 Remake of the classic 1949 film, which is based upon a novel and a true incident that occurred in 1941, WHISKY GALORE is a charming romantic comedy about an island that has run out of alcohol thanks to the privations of the Second World War. As the the two daughters of the local postmaster find romance, a cargo ship runs aground off the coast the locals spring into action to try to rescue the cargo of tens of thousands of bottles of whisky. Unfortunately a stick in the mud army Captain (Eddie Izzard) tries to stop them.

Utterly charming, completely non-taxing and fully enjoyable WHISKY GALORE will put a smile on your face. This film that seems to seek to do no more than just entertain manages to do that in spades. I have been so full of important films at film festivals and big budget money grabs from Hollywood that this film was a real delight. In fairness I think I would have had a smile plastered across my face no matter when I saw it because it just clicked with me.

While the script is a spruced up version of the original story, that I think adds much more romance to the tale (forgive me it's been at least a couple of decades since I saw the original), it still is decidedly old fashion in it's story and story telling. There are no bad words any where and I don't think there is any real violence. The result is a wonderfully low key film.

That the film works as well as it does is because the cast sells it. We fall in love with everyone because they manage to make everyone so charming.

Highly recommended to anyone who wants a good film that isn't big and loud and crude when the film hits theaters Friday.
Posted by Steve Kopian at May 08, 2017