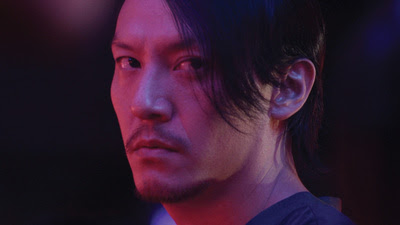 Sabu's MR LONG is a film that only he could have made. A rambling, philosophical gangster/cooking film it goes off in unexpected directions and returns with unexpected delights.

The film concerns Long, a Taiwanese hitman who is sent to Japan to kill another gangster. When the hit goes wrong he barely escapes with his life. Wounded he ends up in an abandoned part of town. Making the acquaintance of a small boy he eventually falls in with the residents who warm to his ability to cook. As he waits for a boat back home he helps the boy's mother get off drugs and builds a culinary business.

A deliberately paced film, the film can seem long at times. The film has a long digression into the history of the boy's mother. It may seem an odd thing to do but it pays off in the end with an emotional punch in the face at the end.

This is a great film to just look at.  This is a film that uses all of the visual cues to heighten and deepen what we are feeling about the story. The opening city sequence is stunning and it makes us feel we are seeing something special. The action sequences are among the best I've seen in a long time. How Sabu films them adds a real punch. When the final confrontation occurs it is as a cathartic bloodletting as anything I've ever seen on film. It's not just what physically happens but what we are seeing actually means that makes it so shattering. There is a release not only for Long but for us in the audience as well. Even the final ridiculously joyous traffic stopping sequence works because of how what we are seeing amps up the emotion of the moment.

I am a huge Sabu fan. His films are not like any one else's. No one mixes things up quite the way he does. This is fact that makes selling his films difficult because people don't know what to make of them which means studios don't know how to release his films in the US. His films defy genres and it annoys people

After the screening I got into a very heated argument with another writer who despises Sabu's films. In their mind he is an actor and should remain that and not turn out films because they don't follow cinematic rules. I don't know what rules they are thinking about, however I do think the films are something more since they tend to be more philosophical journeys rather than straight on narratives. That Sabu's films break the rules, whatever they are, is what makes them so delightful and special.