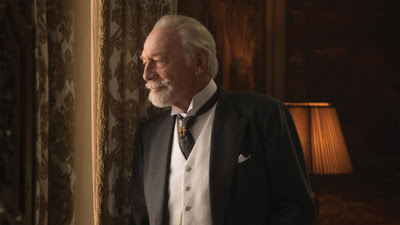 A wounded Nazi officer with a conscious is sent to guard the exiled  Kaiser in the Netherlands. When he arrives he is told to find out where the old man stands relating to the Nazis. He is also informed that there is a British spy in the area who maybe trying to assassinated the former leader. As romance blooms with a pretty maid, things are thrown into chaos as Himmler makes an unexpected arrival for a meeting.

Old fashioned and utterly delightful thriller is the sort of film they don't make any more. Full of old school twists and turns, but amped up with modern levels of sex the film is a fresh take on a 1940's war film.

While this film was on my must see list for Tribeca, I was slightly deflated when I saw how old school the film was. Its not that I hate old school or old style films, rather I find that I hate that most modern filmmakers do it badly. However about half way in I realized that I was hooked and was going to follow it anywhere. Even the ending bits which should have annoyed me made me quite happy because within the context of the film they fit perfectly.

That the film works as well as it does it largely do to the cast which sells it. Lily James, Jai Courtney, Christopher Plummer and Janet McTeer are all operating at the top of their games and you buy everything that happens because they are that good.

I loved this film a great deal and highly recommend it to anyone who wants a crackingly good thriller with a romantic edge
Posted by Steve Kopian at May 01, 2017