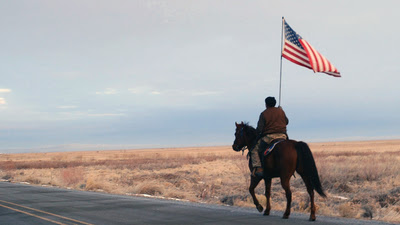 They are speaking of how terrible things are while eating good food, carrying expensive weapons and driving fancy trucks - One of the talking heads explaining what happened

NO MAN'S LAND is a film that hangs with you. It wasn't until I was heading out of the the screening that the film began to really hit me. It haunted my long train ride home and the time since I saw the film.

The film is a look at the standoff that happened at the Mahuer Wildlife refuge in Oregon in early 2016. The standoff was the latest in a series of clashes between some ranchers and the government over grazing rights for their livestock.  The ranchers wanted a return to the "old way" of doing things while the government was tired of explaining to them why that wasn't possible or even ever was the way and  just wanted them to go home. Several months earlier the protesters had "won" a victory in Nevada when the government refused to engage them, and they were hoping to double down and make real gains here.

The film is a look at the protesters who came in from the outside and turned a small town upside down. They were a bunch of guys described in the quote at the top. The film is also a portrait of the government forces who were trying like the hell not to have it all turn violent.

What is deceptive about the film is that for a long while there doesn't seem to be much to the story that we don't already know. We've heard the news reports, we've seen a lot of the on the ground video before and we've heard the rhetoric but it isn't until the talking head begin to put things into context that the full effect comes in, that the protestors were basically fighting a losing battle over something that never was.Its not that they didn't have rights, its was that the limitless rights they thought they had just aren't there and never were. They were championing an idea that had little real connection to reality.

You will have to forgive me but I'm still trying to get my head around what this all means. Its not that the story itself is the problem it's that the film beautifully explains our current political situation and how people egged on by echo chambers and not understanding how things are (like what the laws really are) are gaining power. More and more people seem to think they know what the real situation is or what laws say and then are claiming some sort of grand conspiracy when reality doesn't math their idea of it.

For me the late in the game realization, that what these guys were chasing after was the result of their frustration being shouted into an echo chamber was frightening. As the film infers this is the state of politics in this country (and is how many candidates are getting elected). Like much of the world today all these guys were listening to people who told them to go for it without an understanding of anything outside of their world view. When they did go for it things went banana shaped and it only got worse when they refused to listen to anyone other than the people on social media who were telling them what they wanted to hear.

Sadly when the positive feedback slowed,  and many in the town outside of the refuge made it clear that they wanted them to go home, the protesters  took steps to keep the media circus going. They decided that they would go to a town 100 miles away to try and explain their position because the people had stopped listening where they were. They couldn't see, or didn't want to see, what leaving the refuge and traveling down an isolated road would bring them. It was a move that would bring tragedy.

In a weird way within their echo chamber martyrdom some how proved they were right. Additionally the fact that many of them got off on the criminal charges was was also seen as vindication and not that the prosecutor was a incompetent. (Which he was).

The is the story of a search for a golden age  that never was.

This is a troubling film I need to see it again.

Actually I want to do a double feature of this and the film THE GRAY STATE  which also played Tribeca because both films look at how people view the world are related.
Posted by Steve Kopian at May 01, 2017