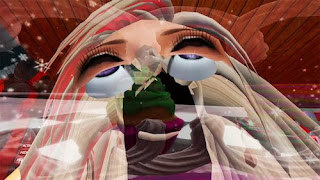 I have no idea what to make of THE EYESLICER.

No strike that. I know what I make of it, the question is what are you going to make of it.

THE EYESLICER is a series of ten hour long episodes bringing together  a collection of new short films from a variety of filmmakers. The show is suppose to showcase "punk rock filmmakers". Based on the episode they screened that is short for pushing the envelope and pushing buttons.

The episode that ran was the second one called Facial Reconstruction and it takes its name the subject on one of the films which has a woman get a facial transplant. Its a strangely compelling tale which sucks you in and drags you along.

Other stories in the show has how to wear make up to screw up facial recognition programs, the story of a thief who walks in on a birthday party and one called Mulignan which has black actors saying stereotypical things you might hear in an Italian neighborhood. While it's very funny it also makes you realize how silly the racism and sexism is.

My one complaint with the series is the computer generated Max Headroom like host who just doesn't work.

Outside of the host the shorts contained in the episode are good enough to make me want to see the rest.
Posted by Steve Kopian at May 06, 2017