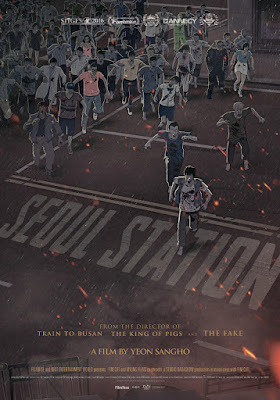 They ran SEOUL STATION in a late night slot at the New York Asian Film Festival and it provoked two reactions. The first was nervous laughter from those in the audience who couldn’t see animation as anything other than something to entertain kids or tell jokes. The other, more pervasive, reaction was a deep dark sense of unease and dread not to mention a feeling that the film was extremely “f-ed” up. Ultimately it was a film that everyone who was there shamed those who weren’t with talk that they should have been there.

The feeling that people should have been there was intensified when Yeon Sang-ho next film the epic zombie mega hit TRAIN TO BUSAN hit theaters and stayed there for months, literally. Suddenly everyone wanted to know what he had done before and was shocked that the animated SEOUL STATION was the film before it. Everyone had to know how the films related to each other and in many circles there was a mad quest to track down copies of the film.

And now, some 11 months after the film played the New York Asian Film Festival SEOUL STATION is hitting iTunes. Knowing that everyone who saw and loved TRAIN TO BUSAN was going to be rushing to see the first film I decided to revisit the film in case my review needed to be updated.

While I’m not going to update my original review, which follows, I do want to say a couple of things.

First despite the way it’s being touted by fans and the releasing company, SEOUL STATION is not really a prequel to TRAIN TO BUSAN. While it came out first the films do not lead into each other. If anything BUSAN should be seen as the first film since it explains how it all starts where SEOUL STATION is simply one event happening at the same time, more or less. I’ve heard that director Sang-ho said that the two films are not really related and that the fact that they are both zombie films was just happenstance relating to his wanting to tell two stories set against similar backgrounds. I'm not sure it's true, but it kind of makes sense since the two films are ultimately different.

The next thing I wanted to say is that don’t let the animation get in the way of your enjoying SEOUL STATION’s story. Just think of it as a damn good horror film. While there is no doubt that it could have been told live action, the scale of some sequences would have made it cost prohibitive. Yes they could have used computers like in Train to Busan, but the scale here is bigger. Animation made it possible to tell the story the way it should be told.

Lastly realize that the film is not about zombies. The plot is really a different kind of story that’s set during a time of monsters. I know the ending bothered some people who saw it last year and I’m guessing that is going to be the case again now that it can be widely seen. Sang-ho is simply using the tropes of horror to tell the story of a search.

Ultimately take SEOUL STATION on its own terms and if you do that I think you’ll like it. For me it was one of the best films I saw in 2016, which is as high a rave as I can give.

Here now is the review I ran right after SEOUL STATION blew me away last June.

Numerous story lines collide- an old guy with a neck wound wanders back into the city and his "brother" attempts to find medical help for him. A young woman has trouble with her boyfriend who wants to pimp her out via the internet. Meanwhile a father looks for his missing daughter. Elsewhere in and around the Seoul Station various homeless people cope with the late night. Everyone wants to settle in for the night - except that the old guy isn't just wounded but carrying the infection that will begin the outbreak of a condition that will see the dead rise and attack the living.

An absolute rarity in the zombie genre, a film with honest to god characters. Not only that its a zombie film with real scares. And its animated.

Normally I hate the zombie genre. I mean I HATE IT, so when I tell you SEOUL STATION IS really good believe me, this is REALLY GOOD. Actually it's quite amazing especially since the zombie film has been so badly raped by lazy hacks and would be comediennes that that to me the genre is pretty much worthless (do not get me started about WALKING DEAD). Yes we'd occasionally get a good film but it as always buried in the middle of 25 turds.. this is one of the best I've seen in years, decades if you want a straight on balls to the wall horror film as opposed to something like MAGGIE or MISS ZOMBIE which use the tropes for other purposes.

SEOUL STATION works for two reasons. First is the characters. Pretty much everyone is a real person. If they aren't a full fleshed out person then we have enough to think there is more to them than just being a cardboard cut out. We car about the people- even the ones we don't like.

The second reason the film works is that the film is set at the start of an outbreak. The characters don't know what is happening so their panic feeds our panic. We don't know the rules because no one knows whats happening so they haven't figured them out. The hordes are not your typical zombie masses but something else. They are fast but clumsy, they fall down a lot. While there is little doubt that they are in a direct line to the George Romero ones, a head shot is needed to kill them and the film riffs his DAWN OF THE DEAD, there are enough differences that it keeps things interesting. It also allows for some scary funny moments as we can't always be sure if someone infected or not. Best of all it feels real and you get the sense that this is how is would probably go (the governmental response is just as chilling as the zombies).

I was scared and on the edge of my seat for most of the film.

And do I really need to mention the social commentary that runs rampant but unobtrusively all through the film? And when you consider this was made by Yeon Sang-ho who made the bleakly depressing KING OF PIGS you can be sure its not a happy film.

SEOUL STATION hits iTunes Tuesday and can be purchased here
Posted by Steve Kopian at May 26, 2017