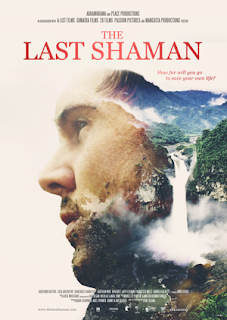 James Freeman is a young man with severe depression. Traveling to the Amazon in a last ditch effort to find something that might happen he begins a series of visits to various shamen who begin to help him find a way out.

Philosophical and medical journey into the heart of darkness both in the form of the jungle and Freeman's heart is an interesting but not wholly successful  look at trying to find an alternate means for treating depression. There is some good stuff here, particularly some of the various philosophies of the various shaman but how you click with the Freeman himself.

Freeman is a nice chap but to be honest he is rather a bland soul. I suspect that director director Raz Degan found something in him to cause him to make the film but for me I just never connected. He could have been anyone, which may have been the point, but at the same time I never connected.

Degan has also shot and assembled the film to look as if it is of the utmost importance. Everything has a mystical quality to it and each shot looks as if it could he hung on the wall. Its so perfect that the film feels less a documentary then a position paper or a very meaningful art film,where everything is staged. Watching the film I pondered how much of this was actually a recreation.

My ambivalence toward parts of the film is unfortunate since the film raises some interesting questions about treatments that might be found in places like the Amazon. The focus of this film is the drug ayahuasca, which at the center of the Oscar nominated the LAST SERPENT. It is a drug that many people swear by and which potentially could help a great many people. I wish the film had focused more on this rather than the deeply meaningful packaging.

Worth a shot if the film interests you, but you don't have to rush right out to see it.
Posted by Steve Kopian at May 10, 2017