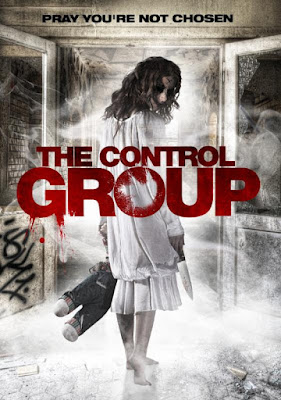 THE CONTROL GROUP is an old school horror film that is akin to the low budget horror films of the late 1980's or early 1990's. Its a schlocky little film that overcomes it's flaws because filmmakers and the cast plays things more or less straight.

The plot of the film has five college students being kidnapped and brought to an abandoned mental institution by an ultra secret black government organization. They are trying to work out a new interrogation techniques and mind control, however there is really a different purpose afoot which unfortunately unleashes a dark force.

Let cut to the chase- THE CONTROL GROUP is an entertaining film that is far from perfect. Yes it really is good on its own terms.

There is no getting around it the the film has some flaws. The film's lighting prevents the film from generating the truly spooky atmosphere that it could have or should have. The film's plot isn't really original. It seems so familiar that I had to pause the film in order to check my records if I hadn't seen the film before (the film had started circulating at festivals and such in 2014). I had not but it still seemed to be traveling a well worn path.

However  despite all of the above the film is actually pretty good.

Far from high art the film just takes it's characters and goes for it. It just tells the story trusting that at some point the audience will, rightly, stop focusing on the flaws and just go with it. Ten minutes in I just stopped caring about the problems and just wanted to see where this was all going.  Yes I know I said that this was similar to other films, but at the same time those other films didn't have this cast and in this case the cast sells the film.

I'm not going to attempt to look smart and name names or try to single anyone out, the cast is all fine. They aren't doing Shakespeare but a low budget horror and they all manage to be in the moment. They invest the film with a seriousness that helps carry things over. They aren't nudging us at the silliness of it all they play it straight so we buy the story. I can't stress how one bad performance can wreck a film. If the cast doesn't buy it why should we?

I'm not going to lie and say that this is a scary film, It's not, but it is entertaining one. Its something to put on and watch when you want something that will just entertain you for about an hour and a half. This is a film for a rainy night on the couch when you don't know what to watch. You may take that as faint praise but it's not- its high praise because its rare that you see a film you can just watch and enjoy and not have to worry if its going to shake the pillars of heaven. It won't shake anything but it will keep you watching from start to finish and have you saying that you liked it when it was done. That may not sound like much but in a world with an increasing number of crappy horror films finding one that will make you smile and feel you hadn't wasted your time is a real treat.

THE CONTROL GROUP is currently available on VOD and it comes out on DVD on Tuesday May 9
Posted by Steve Kopian at May 03, 2017