Disappointing look at people who are so sensitive to the chemicals and magnetic and electrical fields that they are forced to either live in far away places where these things don't exist or they are forced to live spartan lives in rooms wrapped in foil.

Focusing on three stories. Bob is a grandfather who several years became hypersensitive to chemicals, smells and electronic fields who is considering a move to Texas to a special development made for hyper sensitive people. ---- and her twin sons who live in the middle of nowhere in Arizona. They are watched over by --- 96 year old mother who intracts with the world for them. Lastly there is Susie, a sufferer and activist who is the go to person for information on the disorder. 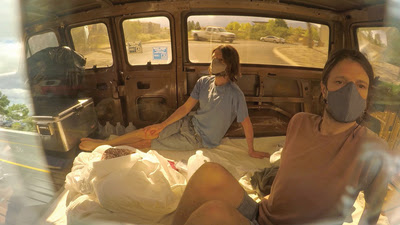 Rambling, disorganized and lacking information THE SENSITIVES shows signs of a great film on the subject, but sadly this isn't it. The problem with the film is that there are simply too many people and not enough time to get to know anyone. Bob and his family come off best since we get to know both Bob, his wife and daughter. Susie is reasonably well represented  but  everyone else just come off as shadows. Who are they? We really don't know.

One of the problems with the film is that for a large part of the film the people suffering from the disorder come off as more than a bit loopy. Granted part of it is the fact that the isolation these people live in makes them slightly crazy and self centered, the other problem is that seeing a room that is covered in "aluminum foil" like a crazy homeless man's hat makes it instantly hard to relate to the person. Yes we come around on Bob but at the same time you can't help but thinking these people are nuts at least for a good chunk of the running time.

Another big problem with the film is we don't know a hell of a lot. Where does Bob live, I must have blinked and missed it. We have no sense other than a phone call how anyone with this disease gets money t live. Even the disorder its self isn't well explained. We see some explanation, we see some video of Susie, but at the same time why can they go out sometimes and are fine and at other times they are not (This is an acute problem with Susie's trip to Washington - why is she in a wheel chair and not or okay and then doubled over? There is no sense of it) Why are somethings wrapped in plastic and others not?

I was left repeatedly wanting to stop the film to ask the filmmakers clarifying questions.

There is a good story here. There is a moving feature film that could be cut from this and I'm hoping the material left on the cutting room floor. Sadly this film while okay, isn't really worth your time.

One of the big disappointments of Tribeca.
Posted by Steve Kopian at May 06, 2017