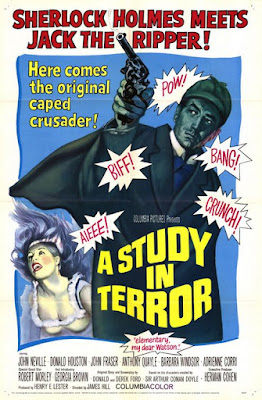 I have no idea how many times Sherlock Holmes has battled Jack the Ripper over the years but here he is at it again, and in brilliant color to boot. I mention the color since the film, coming as films were rapidly being only made in color, takes great pleasure in showing us the colorful world of Victorian London and White Chapel in particular. Its a very 1960's sort of thing to do, as is the use of bongos on the soundtrack. Neither of these things really hurt the films plotting, but they do place it in a reality that could only be an English film studio in the 1960's. There's a feeling attached to many non-Hammer English films of the period that the producers were trying to give you something you couldn't get at home on a black and white TV, namely color. This need to show off detracts from what is a good thriller.

The plotting of Holmes attempt to solve the Ripper killings is reasonably well done. The hows and whys of the killings are interesting, however I have to say that I find that they are not as well done as in Murder by Decree, which is one of my favorite films (Holmes or otherwise.) For this reason I have some reservations, which are purely personal and should not stop you from at least watching this good movie.

John Neville as Holmes gives a very human portrait of a man of both mind and action, doing what ever it is to get the case solved. His relationship with Watson is pretty much as equals, something that is missing from most Holmes films which present the Holmes/Watson relationship in such away as to make you wonder why they are friends. I like that you can understand why they are together.

Over all, a good little movie, though as I said it suffers by comparison.
Posted by Steve Kopian at May 26, 2017