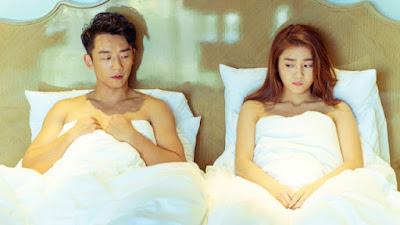 As the protag of a break-up franchise, you would think Meng Yun would have plenty of experience with failed relationships by now. However, he was not around for the second installment. His buddy Yu Fei was there, but it was a very difference Yu Fei. Tian Yu-sheng goes back to the original elements for the conclusion of the [loose] trilogy, but Meng Yun is keenly aware he isn’t getting any younger—and the final break-up is sure to be the hardest in Tian’s Ex-File 3: The Return of the Exes which plays Friday at the New York Asian Film Festival.

Meng Yun and Lin Jia probably never should have called it quits, but they are both too stubborn to apologize or seriously examine their own faults. Their friends Yu Fei and Ding Dian never should gave broken up either, but they still spend so much time together, it is like they are still together. Frankly, they largely broke up out of solidarity with their friends and will likely patch things up sometime when they aren’t having closure sex.

Unfortunately, Meng and Lin are an entirely different case. They still conspicuously pine for each other, but they refuse to let go of their resentments and pride. As a result, both will most likely cause nothing but frustration and heartache for their subsequent romantic rebounds, but Lin’s former classmate and Wang Zi, the niece of Meng’s new client are still eager to try.

Part two was more of a traditional rom-com, but the Meng Yun installments better compare with Pang Ho-cheung’s more mature and realistic Love in a Puff/the Buff/Off the Cuff trilogy, except Ex 3 gets surprisingly fatalistic down the stretch. Basically, Tian wants us to understand you can still mess up a relationship, even if it was meant to be. On the flip side, if you have a chance to settle for someone who is attractive and compatible, don’t be an idiot about it. Just do it, even if you are not head-over-heels for them. These are points Meng and Jin will learn the hard way.


Han Geng and Kelly Yu Wenwen look like a perfect couple, but they each show substantial range, venturing into some dark and angsty places. In contrast, Ryan Zheng and Zheng Meng Xue keep things light and naughty, but they are undeniably charismatic as Meng and Lin’s shallow fuerdai-esque friends, Yu and Ding. They are certainly well matched. Luo Mi’s Wang Zi deserves better than she gets in the film, but conveys a fair degree of depth beneath her relentlessly cute and upbeat façade.

Essentially, Ex 3 is half rom-com and half anti-rom-com, which constitutes an interesting mix. That also means the candy-colored posters are a bit misleading. Regardless, Tian pulls off the balancing act fairly dexterously, while reaping the benefits of lead and supporting performances that considerably exceed expectations. Arguably, we are talking about the stuff of New Adult melodrama, but it is nicely executed. Recommended for fans of Pang’s Love trilogy who found the Tiny Times franchise too superficial, Ex-File 3 plays Friday at the New York Asian Film Festival

For tickets and more information go here.
Posted by Steve Kopian at July 02, 2018