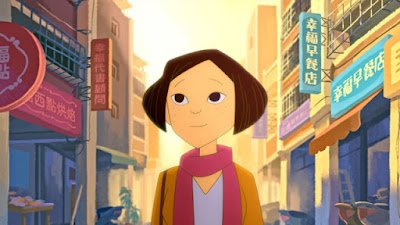 A Taiwanese woman living in New York City receives word that her Grandmother has passed away. Heading home for the funeral she thinks back to her childhood and her life to this point.

The visuals of On Happiness Road will absolutely delight you. It has a sun splashed palate that will make you feel as though you are on the titled road. It’s a gloriously drawn film with some of the most engaging visuals this side of Isao Takahata’s My Neighbors the Yamadas. The visuals are so good that they help carry the film over the bumps in the script.

While possessing great moments and flashes of genius On Happiness Road is a hampered by a script that is all over the place. Dream and fantasy collide with reality and memory at the oddest times. While it makes for a visually rich film it can leave even a patient viewer weary as it bounces in and out of styles and realities at moment’s notice. While it is very much how we live life there are times where we have to readjust and then readjust again. While I eventually just went with it the bouncing kept me from fully engaging with the film.

Reservations aside this is good little film. Besides any chance to see non-Disney animation on a big screen is one that must be seized upon.