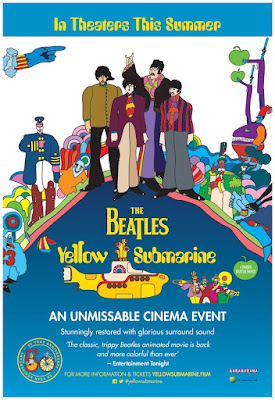 I don’t know about the rest of you but I live in a yellow submarine. I have lived there since I first heard the Beatles song. I took up permanent residence one I saw the film and it changed how I saw film.

The animated film was not supposed to happen. The Beatles were supposed to make a third film as part of deal they signed. They wanted no part of it. The Joe Orton film fell through as did Richard Lester’s take on the Three Musketeers (though that resurfaced several years later with a stellar cast). I believe Al Brodax floated the idea that they could do animated film, all they had to do was provide some songs. Thrilled at not having to do anything the Beatles agreed. The filmmakers went to work. Somewhere along the long and winding road a classic was produced. When the film was just about done it was shown to the Beatles who were so pleased with it that they agreed to shoot the live action segment that closes the film. (They also regretted not being part of the film)

The film itself is set in Pepperland where the Blue Meanies and their Allies, who hate music, have taken over the peaceful land. Fleeing in the Yellow Submarine that brought their ancestors Old Fred goes off to find help. He stumbles upon the Beatles who travel with him to Pepperland to take on the Blue Meanies.

A wonderful witty and gorgeous film filled with eye popping imagery, classic songs and endlessly quotable dialog Yellow Submarine is a an absolute delight. Joyously happy it is a film about fighting back against impossible odds and winning. It is a film that simply makes you feel good and go out of the theater singing.

A semi-lost classic, many people don’t really know the film because it was never really played on any sort of TV. I was lucky living in New York because it played more than anywhere else in the US. I don’t remember it ever being on cable. It wasn’t until hit VHS and DVD that many people I know were finally treated to the film and not images.

I don’t know what to say but this is one of my favorite films of all time. I will put it on and go off and feel good. Several years ago I got to see a restoration of the film at the New York International Children’s Film Festival. It was the first time I had ever seen it on the big screen and it was a blast. Sitting in the Balcony with John, Randi and Bully we found ourselves watching a whole new generation of kids fall in love with the film. They reacted in all the right spots and sang along with the song. Leaving the theater everyone was big smiles.

But don’t think this is a film for kids, it’s not. Written for adults the film is full of visual references and puns that no kids will get. I was in my late 20’s before I understood some of the jokes because I didn’t have the frame of reference. This is one of the most intelligent animated films you’ll ever see. (And it was partly written by Erich Segal who wrote Love Story.)

And now having been restored yet again in 4K the film is back in theaters starting today. Playing in theaters around the country over the month of July Yellow Submarine can now be seen as it should be – big and loud. As good as the film is on TV it is nothing to seeing it on a theater screen where the audience can be sucked in and carried along. Not being able to look away from a huge image of attacking Blue Meanies or watching the original Sgt Pepper’s Lonely Hearts Club Band play will bring tears to your eyes. Seeing the film big is a genuine trip to Pepperland.

I love this film. I love it not because of the Beatles but because it is just a great film. This is what animated films should be – visual delights that work on multiple levels.

For more information and a list of theaters and dates go here.
Posted by Steve Kopian at July 08, 2018