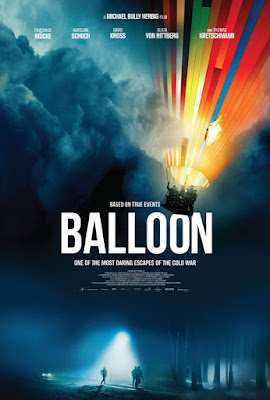 If you are of a certain age you may have seen the Disney Film Night Crossing about two East German families who take a shot and attempt to flee to the West via hot air balloon. There were of course complications which made for a hell of a thrilling ride. The film, released in 1982 came some three years after the events and was filled with Cold War intensity. It is a film that came at a time when Disney was trying to make more serious live action films and once the Berlin Wall fell the film fell off the table and only really remains in the memory of those of us old enough to have seen it.

Recently writer director Michael Herbig decided to retell the story. Restructuring the telling, the tale begins closer to the first attempt to cross the Iron Curtain (there were two with the second being much more intense as the police hunted the people responsible for first),Herbig has made a killer thriller that not only keeps us on the edge of our seats, but also has an emotional sting in it’s tale since the passage of time and the fall of the Communist regime allows for a very emotional ending.

While I don’t think he’s well known here in the US writer director Michael Herbig came to my attention about 20 years ago when he made two very funny comedy films Manitous’s Shoe a send up of the Karl may Shatterhand stories that inspired the films that kicked off the Euro westerns of the 1960’s and 70’s as well as (T)Raumschiff Surprise - Periode 1 a spin off of a send up of Star Trek which reduced me to uncontrolled laughter. My understanding was that he was a comedy genius (though I knew little about him because I simply don’t speak German) so when he turned around and made a serious thriller I had to take a look.

Balloon is a killer. Because Herbig is old enough to have lived through the events depicted in the film he has the ability to portray both the smart ass attitude some people developed to survive as well as the ugliness East German authorities who shot to kill those who would dare leave their wonderful country with the certainty of a man who was there. There is no Hollywood heroics, just a real life grittiness and we are better for it.

We are also better for the passage of time.  The original recounting was very much of it's time. It was a film informed by the battle lines of East and West. It was a film that was, at the time of the moment which gave it an immediacy. However time marches and on and our perceptions change. More importantly events  continue to play out. Yea the escape happened, but repercussions played out. We get to see where those events lead and in this case it is an ending that is much more moving and earned.

I really love this film a great deal. I love it  because it is a great tale and a well made thriller, but also because it got me to revisit the works of the director at a time when I will now be able to track down his other films in English.

Balloon is highly recommended when it hit theaters this Friday such as the Quad Cinema in NYC.
Posted by Steve Kopian at February 18, 2020