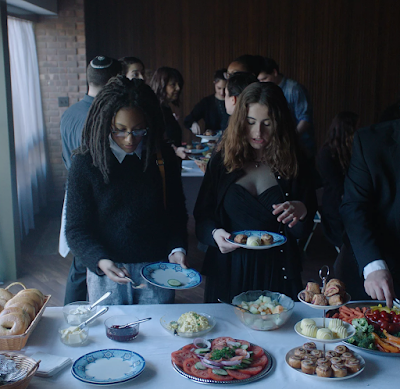 TAHARA is a major misfire.

The story of two high school BFFs who after a memorial service for a friend who committed suicide end up kissing each other sending their lives spinning off into unexpected directions.

Where do I begin? Probably with the aspect ratio. Shot largely so that that it has the narrow vertical aspect of cell phone video it suddenly springs to full widescreen for some very brief animated sequences which occur to illustrate the opening up of the two girls' world. It works the first time it is used but the following times the effect really isn’t there. Intellectually I understand why the aspect ratio changes were done but emotionally it feels like showing off.

The biggest problem though is the script doesn’t work. Both the characters of Carrie and Hannah seem older than their years. These aren’t teenagers but adults in teenagers bodies. Worse they seem like an adult’s idea of teenagers and not real people. They are full of witty lines in exactly the way real people never are. These are constructs not real people, regardless of how well they are acted.

The script is full of cute bits that take away from this having any notion that this is in any way linked to reality. For example a conversation between the girls at the memorial service consists of the two girls making faces at each other while subtitles reveal what they are supposed to be saying. It’s the wrong sort of attempt at being clever, and even if at the end we see that it is actually supposed to be a written conversation between the girls, it just doesn’t work.

The biggest problem is that the construction feels artificial. Everything takes place in one a couple of hours in a building that is largely empty and it doesn’t feel right. This feels like its been closed down for dome unknown reason It could work if this was on stage but confining events for film it just feels forced.

The couple the restricted setting with the way the movements of the characters around the building seems odd, with everythinge outside of the two main characters always seeming dependent upon which what the plot needs- do we need a crowd? Do we not? The girls have to talk alone lets give them a place to be alone. None of it feels right. How is that they can just wander around the building with no one about most of the day?  I am not against what happens but I am against how it happens here since it feels like the hand the writer/director moving everyone around.

What kills me is is that all of the pieces from the acting, to the one liners, to the basic plot, are all good. The problem here is that how they are put together doesn't work with the result the film as a whole just misses.
Posted by Steve Kopian at February 01, 2020