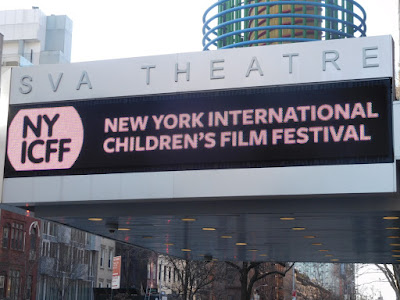 The opening night of this year's New York International Children's Film Festival has come and gone leaving us racing through four weeks of great films. As has been the case for most of the last 15 years I was there and I brought along Hubert Vigilla as my wing man.

Very close to sold out, the screening was in the large theater at the SVA theater on 23rd Street. By the time Hubert and I got in we had to sit all the way in the back.

A quick apologies to Jessica and the other NYICFF who said hello as I wandered in being moved along with the crowd. I was caught up in the flow and moved along and by the time I heard your greeting I got moved along.

As happens every year the wonderful Nina Guralnick  welcomed us in. She introduced the NYC Media and Entertainment Commissioner Julie Menin who said a few words before Nina  introduced the film and did the t-shirt toss. 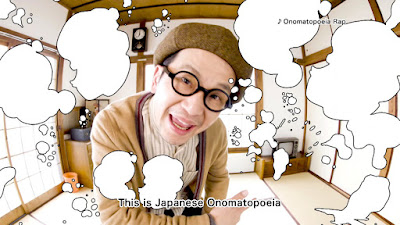 The short that played before the film was Onomatopoeia Rap (Japangle: Manga) which amusingly explained the sounds you see in manga. 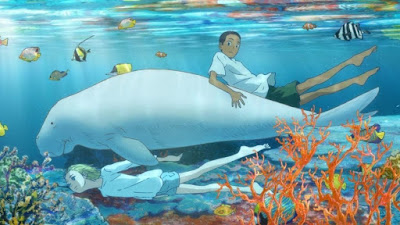 The main  film was CHILDREN OF THE SEA which played after a brief introduction by director Ayumu Watanabe who warned us that there was a post credit sequence. (If you see the film when it is released in April you have to stay.

Based on a five volume manga the film tells the story of Ruka who befriends the brothers Umi and Sora who live at the aquarium where her father works. The two boys were found at sea and they are must stay wet lest their body temperatures rise or the sun burn them. They are some how connected to a great aquatic festival that is calling all of the creatures in the sea to a certain spot.

Visually stunning, the images in this film are absolutely mind blowing. The look of the film, the use of differing styles of art and vast expanse of the what we are seeing impresses to no end. The visual look of the film is so good that despite the fact the plot doesn't work the film is still a must see on a big screen.

The problem with the film is that in chopping down the plot from the source way too much goes. We have no idea what the end is suppose to be, several important characters are cut outs that just exist in this version to move the three leads around, character development stops after 15 minutes and there is the strong sense that the filmmakers have all this information that is not being transmitted to the audience.

If you want to know what the film feels like Think hat would happen if Terrence Malick remade TREE OF LIFE by way of Miyazaki's PONYO but heavily referencing and leaning on the final sequences in Kubrick's 2001. Then make it more obtuse just because. You know you'll have seen something heady- but you'll have no idea what it is.

From what I read on the manga after the fact I think some of the answers are there but they never transferred when source author Daisuke Igarashi wrote the screenplay.

Honestly I like the film and it's mind warping style, but I also think it is a major misfire because we are too adrift.

Kudos to NYICFF for realizing kids can handle heady material, but take a few back for confusing the hell out of a number of them (and the adults)
Posted by Steve Kopian at February 24, 2020