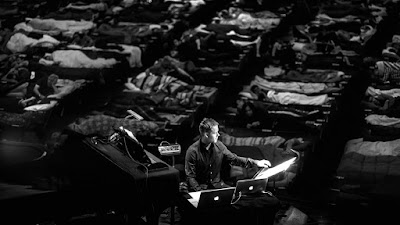 One of my favorite films of 2020 is a portrait of composer Max Richter and his eight and half hour piece of music called Sleep. Framed around various performances the film is a meditation on sleep, music, composing and how we react to them as an audience. It is also a really good way to chill out and drift off (I mean that in the best sort of way).

Made up of clips of the piece director Natalie Johns intercuts interviews with Richter, musicians and various listeners in order to create a one of kind film. Somehow Johns has done the impossible and created a film with a soundtrack as special as the work it is about. What I mean by this is that the words she has chosen blend with Richter's music to become it's own piece.  Watching the film on a screener I watched the film for the purpose of review and then a second time later that evening with the picture off. Make no mistake this is pure movie magic which takes a one of a kind live exerience and turns it into ital cinema.

To be honest I didn't have any interest in ever listening to much less seeing the whole work, however after seeing the film I've ordered myself a copy of the CDs plus Bluray and I'm hoping it shows up in New York so I can see it live.