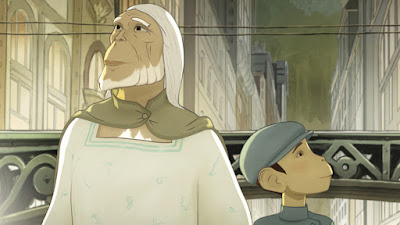 Yes I know I just ran this piece when the film played Animation First- but its is playing at NYICFF Sunday and two sold out dates in March.

While out traveling the Monkey Prince falls into the ocean and ends up on distant shore. Discovered by a Tom, young boy, he is nursed back to health by a group of scientists who tend to study him more than engage with him. Each have their own plans for the Prince. As Tom and the prince discuss life and the world the prince now inhabits plans are made for escape.

This is a stunning gem for those willing to go along on its journey. Paced so that it mirrors the Prince’s time with Tom, the film moves along slowly during the first half as the Prince is restricted to the museum where he is being kept semi-prisoner. The pace picks up again as the prince tells stories of his home. The film then gains momentum as the Prince and Tom go exploring and the Prince meets a scientific committee. This is a slowly building film of great power.

Looking more conventional than co-director Jean-François Laguionie‘s (it was co directed with & Xavier Picard) earlier shorts of his first feature Gwen and The Book of Sand, the film is none the less just as deeply philosophical as those earlier films driving home points about colonialism, how man sees “lesser” beings, science, society and nature over taking man no matter how hard we try to stop it. While I know and love the directors earlier films and knew what to expect, I was still kind of blindsided by the film as the film quietly dropped all these threads into my lap giving me more and more meat to chew on. I was stunned since the film on the face of it seems so incredibly simple yet upon close examination reveals it to be one of the most thematically complex films in years. There is a lot going on here so don’t let the pretty animation fool you.

And as much as I have gone on about the themes at play the film is also emotionally moving. By the time the final fade out comes I found I was deeply moved for all the right reasons.

As I said above a gem.

The NYICFF screening Sunday the 23rd still has tickets for certain. The two tickets in March are nominally sold out but I know tickets always appear. For more information and tickets go here.
Posted by Steve Kopian at February 19, 2020