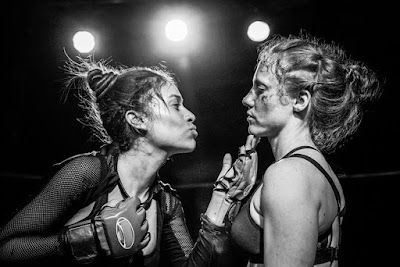 Shannon Murray plays a young woman who is struggling to get by in life. Her personal life is a mess, he job cleaning rooms in a motel sucks and her mother, often a real SOB, is slowly dying. Her only escape is the gym where she excels at MMA. As things begin to slide the possibility of a new beau arrives as does the chance to win an MMA tournament .

Small gem of a film is a wonderful off brand American film. While this film follows certain familiar paths we expect from this sort of sport film, there is more than enough here to make it wonderfully it’s own thing. Yea, we have been kind of here before but at the same time we haven’t. Credit the excellent cast headed by Murray as our heroine. While I wasn’t certain I was going to accept the very deep intensity she gives in her performance, particularly in the early going, she did eventually win me over by beautifully opening open and allowing us to what is happening inside. Make no mistake she is still a tough fighter but there more to her than the combativeness that she puts forward. This is also an award worthy performance that will probably never get noticed by Oscar even though it should.

This is a super little film. Watching it on the morning of the recent Oscars I was struck by how much better this film was than many of the big films that were getting all the attention in Hollywood. Here I was sitting alone in my living room watching a heartfelt film full of quiet intensity. It has the rough hewn feel of a life lived which makes it so much more real and alive than the finely crafted films the Academy always thinks, wrongly, are the best things out there. Watching the film I could imagine the struggle to get this made where as in the case of the latest Tarantino it was just making a few phone calls writer director Bailey Kobe probably had to struggle to bring his vision to the big screen. It is a struggle that gives RAG DOLL a life that touches the heart and the soul of the audience in ways that the big Hollywood films could never imagine.

What a wonderful little film.

If you want to see a film that isn’t like every other, give this film a shot.