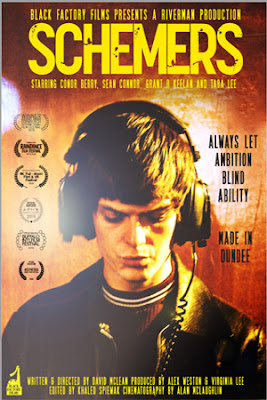 Writer director Dave McLean's memory play about the days when he fumbled around and fell into music promotion in Dundee in Scotland- eventually promoting the likes of Iron Maiden on pulled together concerts.

Moving like the wind SCHEMERS is full of a sense and time and place. We can pretty much smell Dundee in the early 1980's thanks to McLean's eye and the thick accent and seeming period appropriate slang. It is a big warm hug to the directors hometown.

As to whether you will love or hate the film will depend on whether you click with it. To be certain the accents may be difficult for some, but the real problem is going to be the stylistic choices which make this a film very close to a Guy Ritchie film but a bit less tightly pulled together. Things seem to be scattershot and random at times as if McLean didn't quite know how to bind it all together- sometimes what should be important details are left kind of hanging.

Personally I really liked the film and it's sense of urgency and life. I fell into it  and it's sense of nostalgia. I won't lie and say it's even close to perfect, but I will say I was entertained which in this case was absolutely enough.
Posted by Steve Kopian at February 23, 2020