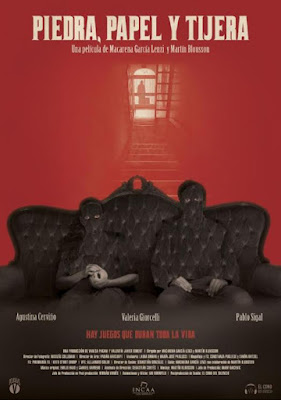 After the death of their father, Maria Jóse (Valeria Giorcelli) and her brother Jose (Pablo Sigal) receive an unexpected visit from Jose’s half sister Magdalena (Agustina Cerviño). Soon after her arrival Maria and Jose discover that She has plans to assist them by taking care of their fathers assets and property. Maria decides to take things into her own hands causing a chain of unfortunate events.

Rock, Paper, and Scissors is a very ambitious project from Argentina created by filmmakers Martín Blousson and Macarena García Lenzi. One of the films greatest assets is its actors. When the audience is first introduced to Maria and Jose they appear to be harmless. It isn’t until Magdalena’s arrival that we see a change in their behavior. There were a few scenes in this film that caught me off guard. When you are watching an film from Argentina the last thing you expect to see is Dorothy from The Wizard Of Oz. Normally this type of reveal would never work in a film like this but because of the characters bizarre behavior it actually fits the story quite well.

It’s rare that you find a film that has a total of three characters without secondary characters to “beef up” the story line. Rock, Paper, and Scissors was created on a low budget. When you have a family that is going through hardships you need to have a certain type of atmosphere to make that believable. Adding too much of a budget to something like that would lessen the impact. People typically don’t think about how they would react in a crisis. You never know what you would truly be capable of unless you were put in a situation where your morals were tested. For many people, myself included, this is quite a scary realization.

Overall I think this film was pretty enjoyable. Some of the darker scenes reminded me of the Stephen King novel Misery, especially the scenes with Maria and Magdalena. I give Rock, Paper, and Scissors a 7/10. While I do think it had its fair share of problems it was still a great watch. I’d recommend this movie to anyone who is a fan of psychological thrillers and foreign cinema.