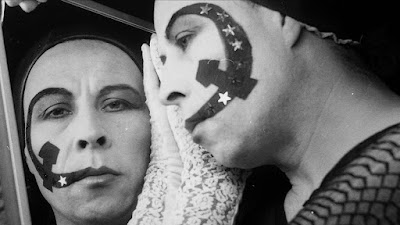 The opening night of Neighboring Scenes 2020 is the magnificent LEMEBEL, a portrait of artist and activist Pedro Lemebel. Put together by director Joanna Reposi Garibaldi after the great man’s death from the material he had been putting together for a similar project, this is a one of kind film. Part biography, part art piece, part meditation on a life and what the man at the center believed it is a film that puts us into particular head space and asks us to commune with the man’s spirit.

For those unfamiliar Lemebel was an artist and writer who rattle cages in is native Chile during the Pinochet years. A gay man who fought for his rights and the rights of others he shook up the status quo and made certain that polite society was uncomfortable. His work reverberated across the globe

Watching the film I was enraptured. There is something about the way that Garibaldi assembles the material, video, film, audio recordings photos and pieces of art that really spoke to me. This is not a straight forward tale but one that jumps around through a life. Along the way we have recordings of -Lemebel talking to an unseen person about what we are seeing. He discusses how he wants the material put together. We become party to how he wants the world to see him. While there is no doubt that his wishes shaped the film, the final arbiter of the material was not the subject but the film’s director who had to make the choices on what to keep, what to lose and how to link it all up. In a weird way this is a kind of making of.

As someone who is increasing delighted by the way filmmakers bend the form to their own ends the fact that this film doesn’t look or feel like any other is a delight. We are not following to typical

While I knew only a little bit about Lemebel before going in, I came out wanting to know more.