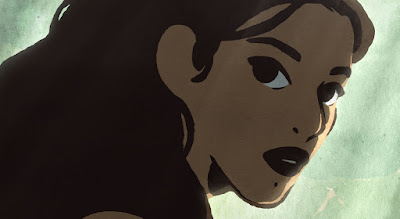 Love, life and death under the Taliban.

Animated using a watercolor style Zabou Breitman, Eléa Gobbé-Mévellec have made a film whose undeniable beauty runs counterpoint to the fear and sadness in the tale of four people living in Kabul. It is a bold move that helps to keep the atmosphere from becoming completely maudlin as one character’s act sets in motion a series of events that will bring about their ends.

I admire Swallows more than I like it. I tend not to like downbeat stories and those that are sadder I tend to try to distance myself from more. While there is no doubt that this is a great film this is not a film that I would watch again. I simply don’t want to go to the place it takes me again. In fairness to the film I will say that other than quibbling about a few changes from the novel there is nothing really wrong with the film, so much so that if you like bittersweet tales this film is for you.

Recommended (despite my reservations) for it’s beauty and powerful story telling when it plays tomorrow at Animation First. For tickets and more information go here
Posted by Steve Kopian at February 07, 2020