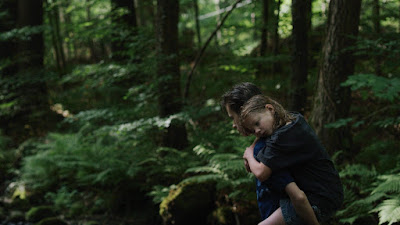 Cryptic puzzle film kind of tells the story of a mother trying to hold her family together in the wake of the death of her husband. It’s a series of seemingly unrelated long take scenes which we have to sort out what it all means.

The most New York Film Festival film I’ve seen in years, it is high art mixing with obtuse musings. It is the sort of film that can only be found playing at NYFF or one of Manhattan’s art houses or museums. It’s a film for a special audience and not for general viewing (there are no explosions or CGI creatures to hold the attention of the mass of today’s cinema goers).

Personally I don’t know what I think of the film. It’s a gloriously shot film full of intensely emotional performances that give us a feeling of looking in a series of emotionally charged moments. At the same time the film is incredibly pretentious and artsy to the point of silliness and boredom. There are long silences where nothing is expressed. Images and ideas (Hamlet, a broken bike, )are thrown up and we are dared to try and make sense of them in the context of anything. Do they mean anything? Your guess is as good as mine. Actually it’s not even certain when it comes to director Angela Schanelec who was quoted as saying at one screening that she doesn’t have the answers and we are free to interpret as we will.

While I love portions of the film and would love to have many of the images hanging on my wall, I do think people are giving it and the director way too much credit for making a masterpiece. I know a lot of people spending an inordinate amount of time on trying to deduce how the dog and donkey that open and close the film fit into the greater scheme of the film. For my money they are all over thinking it and they shouldn’t be looking at the opening closing as a dog and donkey, rather as a dog and pony since ultimately that’s the sort of show this is.
Posted by Steve Kopian at February 11, 2020