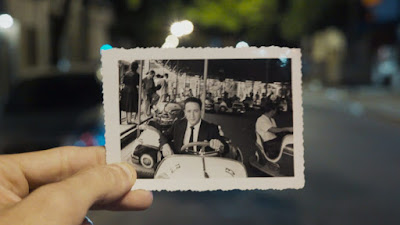 Private Fiction is a quiet thoughtful meditation on family and things we leave behind. In it director stitches together letters, photos and memories of his parents along with discussions with his daughter, father and others to create a portrait of life in Argentina. In the course of excavating his families history he raises all sorts of questions about our own families as well.

Having watched a number of big and loud films playing the Neighboring Scenes Festival I was taken aback by the films quiet meditative nature. It was a radical change of pace that had me wondering what I was seeing. Where were the flashy visuals? Where were the oversized characters? I wasn’t sure. When the film was done I found I really liked it, but at the same time I didn’t know what else to say. I sat on the review and went off to watch the remaining films I was doing in the series…and then I found that the film refused to leave me. I was looking at the photos of friends at work and I was pondering the stories behind them. As director Andrés Di Tella asks at the beginning of the film- why were these photos taken? An exchange later in the film when Di Tella is talking to his father about a letter his mother wrote and how he couldn’t read it because it seemed so personal, and how he could still hear his mother’s voice echoed with me. I can still hear my mother and I am still effected by discovering random notes my mother left behind.

Over time this quiet little film grew in stature. What I thought might be a minor film at the fest became one of it’s best and most haunting. The notions of family and life it wrestles with suddenly seemed to devour my head and heart. Simply put this is the sort of film I live for- one that comes from nowhere to become a great treasure.

I have no idea if the film will hit you as it hit me, but on the off chance I highly recommend it when it plays this weekend at Lincoln Center.