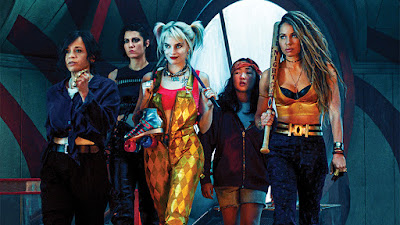 Birds of Prey is the second big screen appearance of Margret Robbie’s take on the Joker’s ex girlfriend Harley Quinn. She was last seen in the much maligned Suicide Squad. In this outing she has left the Joker, thus putting a target on her back as a result of all the people she wronged. In order to save herself she gets mixed up with the search for a stolen diamond which contains the information to find a hidden fortune of a once great Gotham mobster. Along the way she ends up bring together a group of women in order to fight their shared enemy, thus forming the titled vigilante group.

Those looking for a safe comic book film need look elsewhere since this film is full foul language, broken bones, splattering blood and skinned faces as the DC universe makes a hard turn into the realistic. If the death and destruction in recent DC Comic films bothered you because superheroes don’t do that, this film will make you apoplectic. On the other hand if you like your violence crunchy this film is for you.

I am really mixed on the film. While I have no problem with the violence I am not certain if the film gets its tone right. Playing very broadly the film never fully manages to make some of the dark turns scary. To be certain they are icky but things are so light that they are never tense. We never really fear for our heroines because they are so much smarter than the villains. In a way the film plays like one of the goofier Harley episodes of the Batman animated series but with broken bones and flayed faces.  To me it would have worked better with a less goofy attitude

Additionally the plotting of the film is all over the place with some things wildly over plotted (hence the often wild use of flashbacks) and other things just sort of laying there. There are whole sections where characters just disappear despite the sense they should be on screen. Black Canary’s character feels like she was pared down from something larger since there is implications of a greater arc that isn’t here. This is also true of Rosie Perez’s Montoya who does little but spout bad cop show quips. Outside of the lack of writing for The Huntress, who is a kind of non-entity, I can’t tell whether the problems are the fault of the script or of  endless tinkering in the editing to get a finished film. While I don’t know for certain but I am going to guess that there was some sort of behind the scenes tinkering because the people involved in the making of the film know what they are doing- I mean the second half of the film rocks.

Ultimately the first half of the film is the problem. Events flail about seemingly at random. Characters are thrown about at random as if they are desperately trying to balance too many characters and story lines. There doesn’t seem to be a rhyme or reason to much of it. There is no through line or any sense of narrative or even an intentional lack of narrative. There is only a sense that the film is trying to tll a story though it isn't sure what that is.  It was so off in that first half I seriously considered walking out and going home. However the action sequences and throw away bits amused me enough that I stayed. It was a good choice since once the whole diamond plot kicks in the film finally gets on firm ground and races to the end. It may not be perfect but it does entertain.

And ultimately that’s the best thing I can say about the film as a whole- it’s not perfect but it entertains you enough that you’ll want to see another, better plotted, second go round with the characters
Posted by Steve Kopian at February 16, 2020