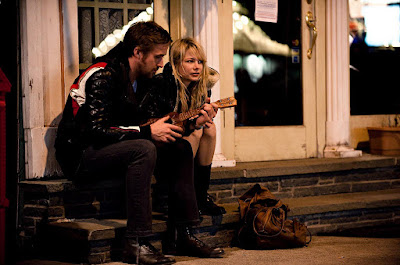 It's a time tripping film about the end and the beginning of a relationship.

A favorite at Cannes and other film festivals, the film is probably best known for the battle for its rating. Originally rated NC17 because of its sex scenes the film was re-rated R. (the scenes are not gratuitous) Well reviewed, with lots of Inde cred, the film is good, but I don't know why it attracted all of the attention it did. Yes it's got several great performances, but in my mind the film is dramatically flawed. The conceit of seeing only the beginning and the end but not the middle doesn't work. The problem is that too much has changed, particularly with the Ryan Gosling character that he seems to have been ported in from another movie. How did they get there?I don't know.

Actually the film doesn't really know what to do with the Gosling character at all. In the early scenes he's a sweet but not not too bight guy. Then in the later scenes he's a gruff nasty guy as aimless as before but with a violent streak. Where did it come from? Short of one early scene- somewhere around when he climbs the fence- there is no indication of the character change. To me the film is all about Michelle Williams character and anything else only exists to help her arc. Since the Gosling Character as written in the early scenes would allow for it, they chopped the middle of the story out and changed him to what suited those purposes.

It doesn't really work and it reminded me more of the mumblecore inde films that are popular for a brief instant before fizzling. In all honesty had the Weinsteins not been pushing this, nor had it not had the rating controversy this film would have rolled over and sunk from view.