Talking about community: COMPANIA and WAITING FOR THE CARNIVAL at Neighboring Scenes 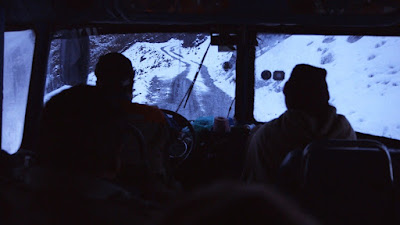 COMPANIA
Residents from a small town inn the Andes return home for the festival of the dead.

Ethereal documentary often plays like some of the films of Werner Herzog but something much more it's own thing. Long, often wordless sequences put us into a place we've never been with the result that we leave the theater we are sitting in and travel to a place thousands of miles away. The mood is set with a long opening sequence scored to the music of players that take us from the city to the mountains. Its a brilliant gambit that at first seems like a trick that isn't going to work. But director Miguel Hilari knows what he's doing and it isn't long before the marriage and word and image flip the switch and we are all in.

I am in awe. Rarely has any documentary so perfectly put me in a space of it's choosing.

A must see masterpiece. 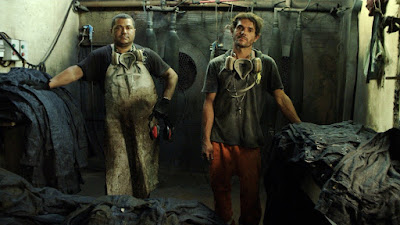 WAITING FOR THE CARNIVAL
Portrait of the small "factions" that have sprung up in Toritama in Brazil. These are small mom and pop factories that turn out blue jeans night and day. They started to appear when the big factories went broke and the workers started to do the work themselves. They work all year, everyday until the time of Carnival when they head to the shore for vacation.

I was not intending on seeing the film, but ended up seeing it just because. I am so glad a did for a number of reasons. First it showed me a way of working for which I had no idea. I really never expected mom and pop shops could be so successful. Many of the people do the work because they like to and it plays so well. I also loved the film because I genuinely loved the various people we meet. More and more with documentaries like this I am not interested in the "job" but I am interested in the people. If I can meet people I would like to sit and talk to I am in heaven.

This is a wonderful little film and is recommended.

WAITING FOR THE CARNIVAL plays next Tuesday at Neighboring Scenes

For more information and tickets to either of these films go here
Posted by Steve Kopian at February 12, 2020