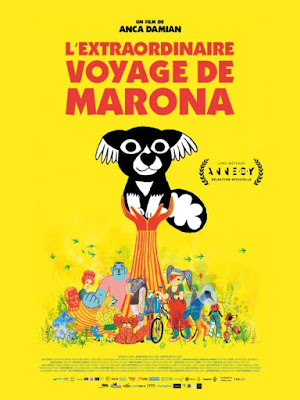 The life story of a mixed breed dog from birth until death told as Marona is in her last moments of life.

I honestly don't know what I think of MARONA'S FANTASTIC TALE. Told with deeply philosophical bend via a mix of expressionistic 3D and 2D animation, the film never quite grabbed me emotionally. Yes,I liked it intellectually and technically, but the story always remained just out of reach emotionally...

...no that's not wholly true, the death of the dog at the start and end of the film threw me for a loop and kicked me in the gut. It's a sad turn of events, made darker the second time around knowing everything that lead up to it.

Truth be told I'm not sure the film works as a feature. Watching it I kept thinking that is some of the animated flights of fantasy were trimmed this would not seem as self indulgent. Yea, I know this is a reflection of a dogs life and philosophy but it plods on, with way too many artistic flourishes to the point of being boring. I simply didn't care.

A rare miss for Animation First
Posted by Steve Kopian at February 10, 2020