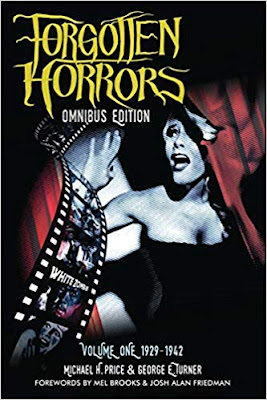 The Forgotten Horrors series of film encyclopedias started by Michael Price and the late George E. Turner are must haves for anyone who loves old films. Focused on “forgotten” films with horror elements (not just spookers but crime dramas and dramas) going back to the dawn of sound the series has been running for decades now and runs to well over 11 books which include not just the series itself but related material, podcasts and CDs. It is a treasure trove of information that I refer to frequently.

The first book was published in 1979 and then updated and republished a couple more times over the last 40 years. Films were removed and then reinstated. A second volume came, then a third and a fourth and so on.  While Turner died early on but Mr Price took his notes and the pieces that were intended for later volumes and as a result he has been a constant presence all along. Along the way Price has picked up some help from additional writers such as John Wooley who have injected their own take on some great films. As time went on Price moved the series to a couple of publishing house correcting and updating the books as he went. The original idea of just to cover "lost films" evolved in one to cover films from the late 1920’s on through the early 1980’s point where B films stopped going to theaters and went to home video. Because of home video making more and more films available Mr. Price has worked really hard with each new volume and new addition to bring it all into line so that there was no need for the pick up chapters that filled the later volumes to add in films found along the way…

..and now there has come another change as Bob McLain’s excellent Pulp Hero Press has picked up the series and is working to release them series in expanded omnibus editions that collect the previous dozen or so volumes into six or seven or so volumes all at a reasonable price.

To be honest I have had the first Omnibus edition for a while now but I only recently had the time to sit down and actually look it over. I was hesitant to splurge again for another edition of the first two books but it was from my friend Bob McLain’s house so emailed him to ask what made the new addition. He emailed me back and said that it had more illustrations and more movies. He also said that they were getting the books truly into chronological order so it goes from 1929 to 1942. Trusting Bob I decided to dive in.

The first thing you notice about the omnibus when you get it is that the one volume is thicker than the first two volumes which it covers combined. This new volume is roughly as thick as my first three volumes in the series. When I was told there was additional material they weren’t kidding.

Inside the book, which has been completely re-typset from previous volumes (or at least the ones I have), you notice that there are not only the promised more illustrations but also it seems like there are a lot of new films. More importantly it is clear that Mr. Price has really gone back and stuffed this edition full of material. While I have not done a comparison of the Omnibus to the earlier editions (largely because I am lazy and don’t want to have to pull out my various editions of the first two books) I do have working knowledge of the series and as I was flipping through the new one going “Don’t remember reading that, or that…”. Yes the old books are contained here but there is enough here to make it worth a repurchase.

To be really honest I love this new edition. It just looks and feels good. I love that both the Michael Price and Bob McLain have worked on getting the series to look as good as possible. I love the book so much it very well may get me to put the others away, and thus stop people asking me why I have multiple copies of the two books. I am also looking forwar to the next volume which will cover the next two volumes, which were never my favorites in the series. I’m looking forward to see what changes and additions come.

The bottom line is that if you love these old films this new edition is a must. More importantly even if you are like me and have the old editions this new one is a must as well- and trust me the cost is such that it is cheaper than the individual previous editions- plus it has enough material for a third of the old volumes.