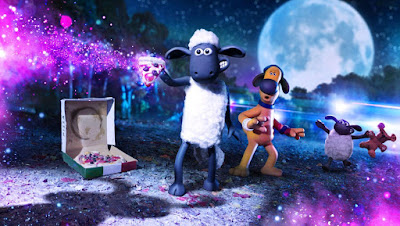 It could be argued- just ask Nate Hood- that the greatest silent movie comedian was not Lloyd, Chaplin or Keaton but Shaun the Sheep. Sure his films have sound effects but effectively he is a silent movie comic of the highest order. Don't  argue that he is animated, he is not, he is real as anyone who has ever been on screen. Just ask anyone who has seen any of his on screen appearances  will attest.

The latest big screen appearance of Shaun comes in the Netflix film FARMAGEDDON, a riotous and screamingly funny adventure that has Shaun and the other sheep helping a lost alien. It sends up countless scfi films while maneuvering itself into being an instant classic comedy. Make no mistake films don't get much funnier than this.

I am not going to spoil the film by saying what happens you will just want to see for yourself but if you want a hint then start with ET and then mash it with Aardman insanity after sprinkling in pretty much every space film from the last six decades. I will also say the film is full of wonderful throw aways and visual puns. Additionally listen close since the film's score echos many classic scifi scores.

Ultimately you need to just see the film- trust me you will love it.

Now I know I said that Netflix is distributing the film but you don't want to see it that way. What you want to do is go to the New York International Children's Film Festival and see this with a big audience where you can laugh and cheer and have a grand time with lots of people (and get t-shirts in the t-shirt toss). The film is playing this weekend and and March 8th and it's a must see because if you see it big you will catch more things than if you see it on TV or your phone. Trust me I have seen the film a couple of times now and I keep catching more and more the bigger I see the film. And if you love to see films on a big screen it is vital that you go to the NYICFF screeningd since the film is from Netflix which means the chance to see it big a going to be few and far between.

FAMAGEDDON is a great film - one of 2020's very best and highly recommended. 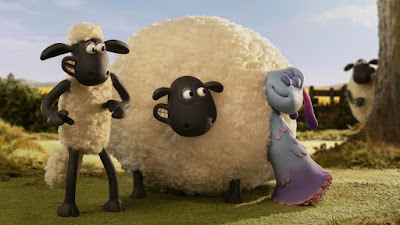