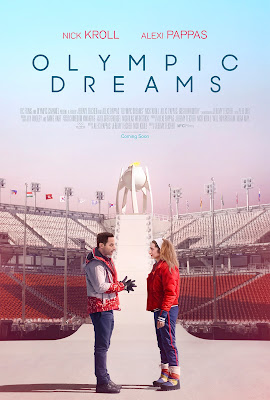 When director Jeremy Teicher, Nick Kroll and Olympic runner Alexi Pappas were sent to Korea in order to make a series of short films during the Olympics they realized that they could co-opt the project and use the camera and access granted them to do the shorts in order to bang together a feature film on the fly. Working out a rough plot outline with a lot of room for improvisation and the ability to wing it they put together a romance on the fly. The result is OLYMPIC DREAMS and it is released Friday.

The wafer thin plot of the film has a skier played by Pappas going through her paces at the game. Along the way she meets and falls into a volunteer dentist at the Olympic village played by Kroll. The film unfolds as the pair spends their free time together and ponder what to do with this relationship that has sprung up between them.

In the greater scheme of things OLYMPIC DREAMS is a curio. It is going to be remembered for the story around it’s filming more than the film itself. It is going to be the answer to the Jeopardy question about what film was shot during the Olympics…

…that said the film itself is actually pretty good. A small scale romance the film is a sweet little confection. I went into the film purely because I foolishly told the people behind the film I would take a look at it, only to find that when I was actually watching the film I was kind of smiling from ear to ear from the start. More telling about how good it is was the fact that I got really pissed off when the screener I was given stopped streaming an hour in and I had to wait two days to finish the film. As things go the anger at not being able to see how it came out right away is a much better review than anything else I could say.

Email ThisBlogThis!Share to TwitterShare to FacebookShare to Pinterest
Labels: romance