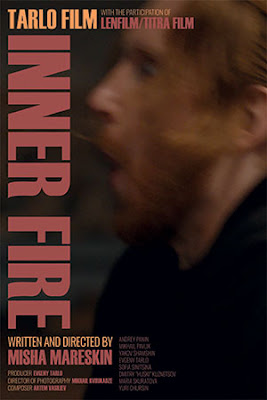 Four people, each with their own agenda, show up at the ritzy apartment of certain man. They begin to talk, stories are exchanged and things get out of hand.

I have seen  a couple of other recent films from Russia with the same set up, people arriving at an apartment with a purpose and all of them have played it gloriously differently. Yea blood is spilled and bodies pile up, but each bend the tale in their own way.

You will notice that I am not saying a great deal about INNER FIRE and that is because director Misha Mareskin has created a story that you need to see unfold. It doesn't do what you expect. More importantly Mareskin does somethings stylistically that are absolute delights. Violent flashbacks make me wonder what he would do with a full on balls to the wall action film. It also puts him on my list of directors who I have to keep an eye on because what he has done is really great fun