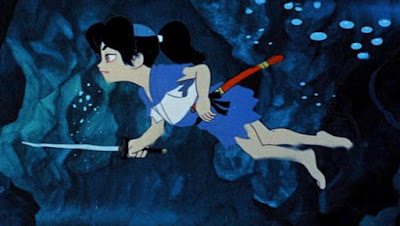 The first big screen anime brought to the US is the tale of young boy who decides that in order to save his friends he will learn what he has to so he can take on an evil witch who wants to bring pain and misery to everyone in Japan.

Looking nothing like what we think of as anime today and being closer to the films of Disney, which inspired it, MAGIC BOY was a film that even confused those of us old enough to have seen the film when it ran on TV in the 1960's and 70's. The film was not like what we knew as animation, which was Saturday morning Cartoons and Disney.  This was something else from somewhere else. For me I was confused by it to some degree since despite being huge fans of Kimba and Gigantor I had no idea what Japanese animation really was.

Seeing MAGIC BOY today is a head trip. It is so not like what we are used to. To me it seems more like the classic European films  of Paul Grimault or Jean-François Laguionie except with ninja and cute animals. It also reaches forward to the early work of the Ghibli master Isao Takahata whose HORUS PRINCE F THE SUN (aka THE LITTLE NORSE PRINCE)  followed less than decade later. It is a weird blending  of Japan and European and Disney like ideas. As a student of animation history I can see how the film pulled together everything that went before and at the same time influenced everything that went after.

Watching the film for the first time in probably a decade if not more I found I  was all over the place about it. However before you think that's a bad thing understand that I was watching it and noticing things I haven't seen before. I was pulling it apart because I was watching the bits and pieces come together and fly apart. I was also watching it with the eyes of on old fart animation junkie. I was looking at it as a snot nosed critic and not regular guy in a seat.

Assuming you are not going to poopoo the fact that it isn't today's anime, this film is a blast. Yea it's not perfect, it is simply trying to juggle too much, but it is compelling and a lot of fun. IN all seriousness there is a reason that I have been revisiting this film time and again for the last fifty years when other films I saw as a kid were tossed on the trash heap.

If you love good adventure films or simply want to know the history of animation than MAGIC BOY is very recommended- so much so that I am hoping to get a ticket to see it on a big screen when it plays Saturday or on March 8th. (Films like this truly sing when seen big)

For tickets and more information go here.
Posted by Steve Kopian at February 25, 2020