There were two films about the Seven Golden Men . Both are essentially extended heist films with complications. 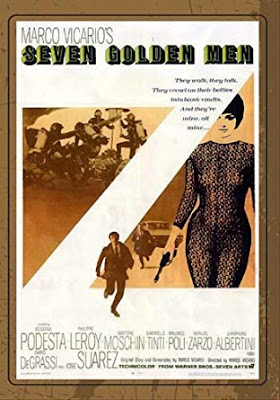 SEVEN GOLDEN MEN
A genius named the professor robs a bank in Switzerland of its gold deposits with the help of his girlfriend and seven disciples.

Good but strange caper film that begins with the robbery, which lasts for over an hour of screen time, before becoming a standard well planned caper has complications for the last half hour. Not bad, but very odd in that the film really doesn't let you know any characters other than the professor and his girlfriend for most of the film. Who are these people, you really don't know, even if it is amusing. Its easiest to explain the film as like watching one of the recent Danny Ocean films but starting with the actual robbery, without all of the set up and character introductions.

I really Seven Golden Men, as a set piece it is one of the best heists ever put on film. It’s so good that even in the years between my viewing the film springs back into my mind as technical marvel. However as good as I think the film is I really can't understand how the film spawned a sequel, except the film haunted enough other viewers that it made enough money to justify it. Don’t get me wrong it’s a great film on its own terms but its kind of emotionally distant.

Absolutely worth tracking down especially with its sequel. 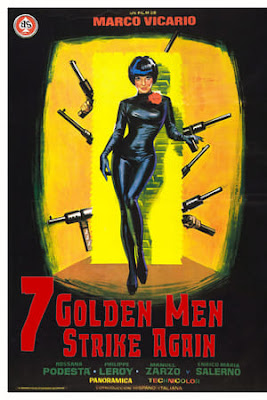 SEVEN GOLDEN MEN STRIKE BACK
Follow up to Seven Golden Men takes the position of why do one heist when you can do several at the same time?

This time out the Professor and his crew are captured mid heist by the American government and forced to kidnap a third world dictator (aka Castro). The professor agrees for seven million dollars. As the heist goes on the government has to contend with not only the Professors weird way of doing things, but also his decision to run a second heist at the same time – the theft of several thousand tons of gold from the hold of a ship.

Very hectic film is an enjoyable romp but isn’t quite up to the first film. Blame it on the film trying to do way too much in its 100 minute running time. There is simply too much going on, including some form of character development. By the time the kidnapping is accomplished I was exhausted- and there was still almost 40 minutes of the film left to go. More is less, despite this being a better made film. Don’t get me wrong I like the film a great deal, I just don’t love it. I think the lack of the laser focus that drove the first film hurts this film. Is simply juggling way too much.

Reservations aside this is still worth a look, especially if you do so in connection with the first film
Posted by Steve Kopian at July 31, 2021