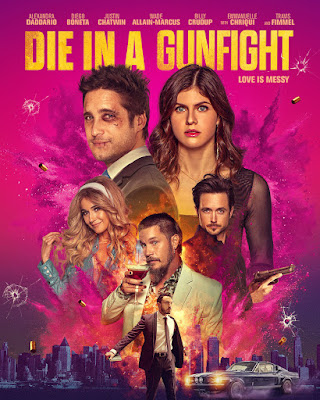 This is one of my favorite films of 2021. Its a film that is often form over content  that ultimately becomes all about content and manages to pull off a magic trick of just existing to absolute perfection.

There is no way to really tell you what this film is without showing you. I could tell you the whole plot and it wouldn't be how the film plays. The trailer (see below) will give you an idea of what the film is but it really tells you nothing. If I were to tell you what  the plot is I might say something like: When they were kids Mary and Ben had fallen madly in love. Their passion knew no bounds. Unfortunately they were each part of a family with a deadly blood feud. Torn apart by their families they tried to stay in touch but families and circumstances prevented it. Years later the pair rediscover each other and complications arise...

This movie rocks. Its a film that is full of real characters, all of which actually arc ans all of which you care about, even if it's plotting to stomp their face. It is told via a narrator (Billy Crudup) who is so perfect that he manages to sell everything we are seeing. Seriously Crudup's narration takes what should have been a form over content Romeo and Juliet riff and turns it into one of the best films you'll see all year.

Yes, I can talk about the technical skill and near perfect direction that make DIE IN A GUNFIGHT a visual delight, but what I want to talk about is the cast who sell it all. Diego Boneta is perfect as Ben, a Romeo who can only feel pain except when Alexandr Daddario's Mary is around. Daddario mamages to be the girl we'd all die for. These two star crossed lovers are as near to perfect a screen couple as we have seen in years. We believe in them and most importantly we want them to succeed. The supporting cast is also sterling including Justin Chatwin, Wade Allain-Marcus, Emmanuelle Chriqui and Travis Fimmel who create roles that you will recall with delight. I will not say who they play lest I give something away.

I absolutely love this film.

In all seriousness you need to see this film. Its a film that takes a well worn plot and makes it something new. Its a film that transcends expectations at every turn. It is a delight and highly recommended. Go see it when it opens in theaters and VOD on Friday.