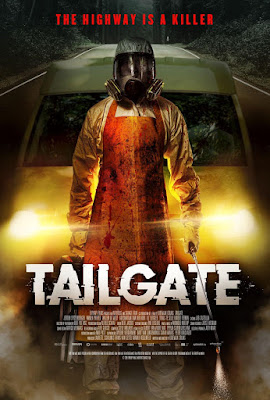 A family on vacation runs afoul of a psycho on the road. He’s a psycho who will not only take you out but your family as well for bringing you up wrong.

Creepy horror film will make your skin crawl as this film turns your typical horror film on their head and has the psycho lurking in the day light and among the well-traveled by ways. There are no night scenes that I can remember, this whole film takes place in bright sunshine. This is film that makes it clear that there is no where to hide, since crazy people are right there infront of us all the time.

I really liked this film a great deal. I love that the film breaks the rules for this sort of thing and plays in the daylight. It messes up our sense that once the daylight comes we’ll be okay. Actually no we won’t. I was chilled more than I have been in years.

As good as the film is I’m not so certain that all of this makes sense. I’m not certain that he wouldn’t have been caught before this, especially since he seems to to be taking people out at a steady clip and no one is paying him any mind.