Flight to Mars (1951) has a stunning home video release 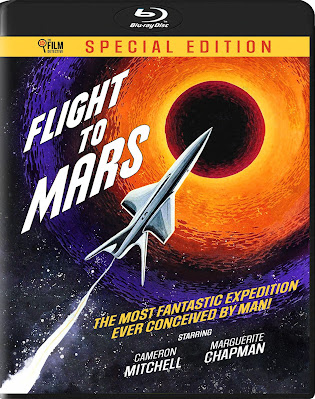 This is a brief piece to say that Film Detective has put out a restored version of Flight to Mars on DVD and Bluray and it has never looked this good.

The film is the story of a trip to Mars by five astronauts. Arriving they discover friendly Martians who are secretly planning on stealing the ship and using it to invade earth.

Released in 1951 it is one of the first of the science fiction wave that filled theaters for the next decade. Its similar to films like ROCKETSHIP XM (which preceded it), Missile to the Moon, Destination Moon,  and others where the astronauts wandered around the cabin of the ship in regular clothes, It’s an amusing film that is clearly not connected to what we know is reality

While the extras on the disc (shorts Walter Mirisch: From Bomba to Body Snatchers and Interstellar Travelogues: Cinema's First Space Race, with celebrated science-fiction artist/historian Vincent Di Fate ● Audio commentary by author/film historian Justin Humphreys) are excellent, the real reason you will want to see this is the restoration. Originally produced in Cinecolor the film has never really been put out in a version that did justice to the image.  I say this as fan of the film and as someone who has suffered with versions that were either bad TV prints, black and white dupes in off showings  or just lack luster releases.  Film Detective’s release looks wonderful compared to what went before  and as such it is recommended